When a couple announces their wedding, the only appropriate response from friends and family is to say: "Congratulations!"

That is the theory.

In reality, a soon-to-be-wed couple -- or couples -- can be exposed to unkind words, confrontation, criticism and all sorts of things that could hurt their feelings or ruin their happy moment.

This is what one couple, Thai-Taiwanese actor/singer Thasapak Chi who is better known as "Bie KPN" and his bride-to-be actress Sumonthip Luanguthai faced from day one when they made their wedding plans public.

Their crime? The bride-to-be happens to be pregnant.

Heavyweight entertainer Ornapa "Ma" Krisdee is one of the people who resorted to the "holier-than-thou" approach concerning the couple's love story. She strongly condemned the couple for "breaching Thai tradition".

With such a fierce reaction and pressure, the couple has been forced to offer apologies -- with tears.

I don't know much about these two lovers, their past or present. Over the past months there were news headlines about their high-profile romance, then their decision to get married, and their lightning-quick wedding plans that sparked a media sensation.

But I admire them and their maturity in handling media questions.

They told the media that while the pregnancy was a surprise, it was a pleasant surprise and they were thrilled to have a child, and ready to establish a family.

The "news" just made them decide to get married sooner, instead of late next year.

Bie and his soon-to-be bride are not the first famous couple to get this kind of unbecoming treatment. Perhaps it's the price of being public figures.

But that does not necessarily mean they deserve this.

The couple in question are both in their 30s with sound incomes and careers. They are obviously able to stand on their own feet. 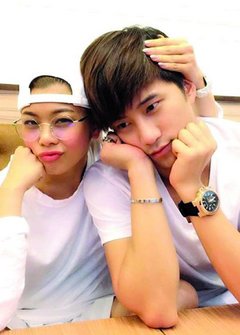 They don't need their parents' approval to tie the knot. It's their own business when -- and how -- they get married.

In this case, that they decided to keep the child -- instead of resorting to an abortion -- and form a family is welcome news. It's truly a family matter and there is no role for the morals police.

Over the past decades, the media has made it okay to corner famous couples due to be married with the embarrassing question: "Is it true that you are pregnant?"

Those who lie can be subjected to emotional torture when "the truth comes out". The more famous, the harsher the torture.

It's not unusual for the media to count the weeks of pregnancy to prove their theory that the star(s) engaged in premarital sex.

The second common question, which is equally ugly, is about the dowry.

However, even though I am not chastising the couple, it does not mean I have no concerns at all.

My concern for this couple and other couples, famous or not, is that given the rate of unplanned pregnancies, it seems a lot of them do not care about safe sex practices.

Worse, some still think it's alright to engage in casual sex.

Without safe-sex practices, lovers are exposed to HIV and other sexually-transmitted diseases even if they believe their partners are not polygamous.

And those lovers in need of a child should be aware of some diseases and genetic disorders that can be passed down through families.

This information can be acquired through blood tests.

All lovers should have this information before they decide to have a child. With medical help, they can work out preventive measures.

It's too late to offer Bie and his bride this information. But as I said, what they did was not a crime and they have every right to be happy.

They don't owe anyone anything.

After all, they have made their decision and those beside them can merely lend their support. Just offer them your "congratulations".

And if you don't have anything better to say, keep quiet and and mind your own business.