While Thai fans scream: "I want to be a captain's wife", it is doubtful whether viewers will get past Song Joong-ki love-sickness and see the message of "patriotism" that Prime Minister Prayut Chan-o-cha wants them to absorb from the Korean drama series Descendants of the Sun (DOTS).

There is no doubt that DOTS has become the hottest Korean cultural export in several years.

The Straits Times in Singapore raved in its review of the drama series. Taiwanese fans begged the producer to extend the show from 16 episodes, half of which have already been broadcast.

In China, where the series has received more than 400 million views, the Ministry of Public Security had to issue a warning against the "dangers" of becoming obsessed with Song Joong-ki, who plays the protagonist, Captain Yoo Si-jin, in the series, and Korean dramas as a whole.

Here, Gen Prayut provoked a media buzz last week when he urged Thais to watch DOTS because of its patriotic themes.

The series is infused with messages of sacrifice, obedience and service to the country, all qualities of dutiful citizens, or so Gen Prayut told delegates at a government function last Thursday.

The hit South Korean TV drama centres around an army captain on a peacekeeping mission in a fictional country in the Balkans. The captain battles shady henchmen to save his love interest, Dr Kang Mo-yeon, played by South Korean actress Song Hye-kyo. 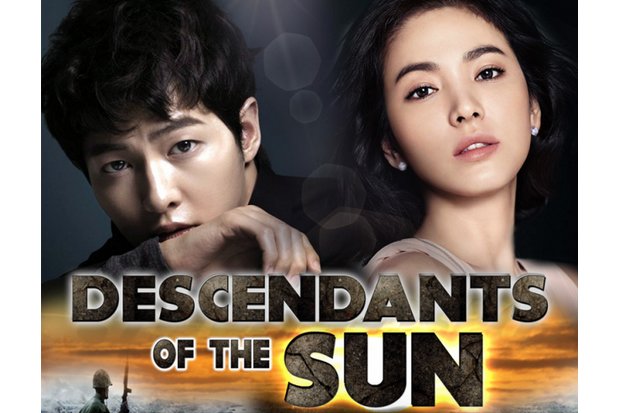 Some people wondered how Gen Prayut could find time in his busy schedule to watch the series. Others were surprised the premier, known for his stern personality, is interested in Korean soap operas, usually associated with teen and female viewers.

As it appears, Gen Prayut was more than impressed. He even offered to finance anyone who would want to produce a similar drama that will make Thais love government officials, and one another.

It's easy to see what kind of "patriotism" Gen Prayut falls for in the Korean soap.

On the surface, the series portrays classic military heroism. Captain Yoo could not only outsmart North Korean soldiers in a knife duel but also engage in hand-to-hand combat with a much larger American. He goes wherever he is ordered and does what the commander tells him, no matter the personal costs. He would kill for his country. He would die to protect the safety of the people in his country.

Gen Prayut must have been smitten with Captain Yoo's profound sense of duty, assuming that patriotism is about following orders, strictly, in military style.

Reality, however, is not a Korean soap. What constitutes the state and national interests has become increasingly diversified. Acts of patriotism may no longer be defined as straightforward service and obedience.

For example, the need to protect the country's natural resources, environment and public health as part of development projects has been long recognised by the law. That is why an environmental and health impact assessment must be approved before a project is allowed to move forward.

When the National Council for Peace and Order (NCPO) issued a command suspending the law, patriotism demanded that people stand up against authoritarianism and resurrect environmental and health protections.

Gen Prayut's actions don't seem to portray an understanding of the expanded definition of patriotism.

It's unlikely Gen Prayut or the NCPO will see protests over their proposal for a wholly selected Senate, functioning as a supervisor of the elected government, as patriotic.

The powers-that-be brand people who criticise them and their ways of running the country as instigators, whose attitude must be corrected through forced summons and detention. They want a few hundred people to rule over 71 million. They seem to want the country to function like one big army, with a majority serving as conscripts.

Deep down, Gen Prayut may see himself as the series' protagonist, an officer who sacrificed himself to save the country from years of political conflict. He definitely believes that everything he has done, every order he has issued, is an act of patriotism.

The problem is that there are people who can see that something is clearly wrong with his vision and plan. For them, it's necessary to defy those measures. For them, disobedience can be an act of patriotism, though Gen Prayut would probably disagree.