The voices of the people are under siege
Opinion

The voices of the people are under siege

Taweesak In-gwang is a resident of Chiang Rak Yai district in Pathum Thani province. Lamom Boonyong is a fisherman in Rayong. Though a couple of hundred kilometres apart, they have one thing in common. They are branded "mafia" by the government because they dare to speak out against state development projects that will affect their environment and livelihoods.

For the past two years, Mr Taweesak has been campaigning against the planned construction of a waste-fired power plant in tambon Chiang Rak Yai in Sam Khok district. The site is only 1.5km from the Metropolitan Waterworks Authority's raw water storage plant which produces tap water for millions of people in Bangkok and its surrounds.

Mr Lamom is a fisherman who sued PTT Global over a major oil leak in 2013. He also opposes the expansion of a jetty at Map Ta Phut industrial estate and is in a fight with Rayong municipality over its land eviction scheme.

Both are grassroots environmentalists, unsung heroes who are trying to protect their homes. Under the military regime they are labelled a "mafia", presenting a "dark influence" against the government.

Last Tuesday, the army arrested Mr Lamom under a Section 44 order, issued by Prime Minister Prayut Chan-o-cha as part of a crackdown on corrupt thugs and mafiosi. There was no need to press legal charges. No need for hard evidence. No need for a warrant. The order gives full authority to arrest suspects and detain them up to seven days.

Two days later, Mr Taweesak faced the same "mafia" charge and was taken into custody by the army for his role in campaigning against the waste-fired power plant.

Both were released after one day. Mr Taweesak was asked to delete his Facebook account. Mr Lamom says he still does not understand why he was detained. He should: "attitude adjustment" incarcerations have become part of the reality of Thailand under the junta. Right after the arrests, a network of 22 non-governmental organisations on Friday released a petition asking the National Council for Peace and Order (NCPO) to revoke the order and revert to the regular judiciary system deal with wrong-doers instead.

The protest letter is not the first to reflect civil society's intensifying frustration with the NCPO. Civic groups and conservationists are opposing its policies that hurt the poor and the environment. This includes forest evictions, the Trans-Pacific Partnership trade agreement, and support for the GMO law. But the last straw was PM Prayut's order to bypass land zoning and impact assessment procedures to speed up megaprojects.

I have spoken to grassroots leaders and activists and can sense their growing concern. "If there is any difference between the Thaksin Shinawatra and NCPO regimes, it is that Thaksin initiated, but Gen Prayut makes it happen," one told me sarcastically.

Indeed. Almost every megaproject opposed by conservation groups and local communities has been given a green light by the military regime.

Under democratically elected governments, people can use the law to stop controversial projects, or make them more accountable. The military regime has revised that state of affairs.

Many local communities are shocked to see how the NCPO is using its absolute power against local grievances. Apart from evoking Section 44's powers to transfer officials and fast-track industrial investment, the regime is targeting active citizens by branding them as "mafia" or a threat to national security. 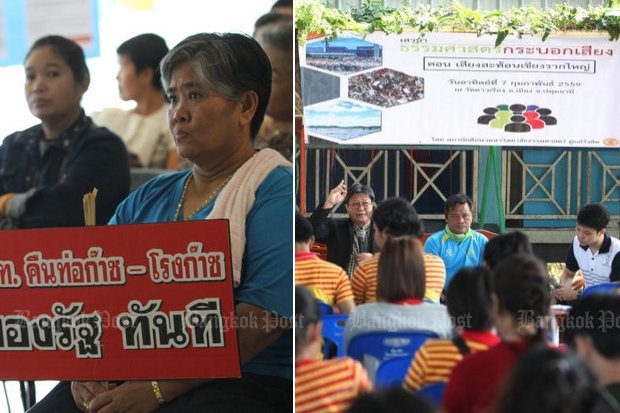 A community member joins a protest against the PTT Global oil leak in September, 2013 (left) and residents protest a planned waste-fired electricity project in Pathum Thani province. Organisers of these protests were detained by the military regime in the campaign against influential figures and "mafia". (Bangkok Post file photos

It is questionable how all this can fulfil the PM's promise to reform the country and return happiness to the people.

Can "kangaroo courts" adequately deal with corruption and local mafia? Can they punish wrongdoers when they don't even get their targets right? Are grassroots activists the right target?

Given the regime's full support for controversial projects, maybe they are.

The NCPO enters its third year next month. Ahead is a rough ride, not only because of the faltering economy and the controversial draft charter, but also tension between the rulers and the ruled. The macho charm of "Loong Tu", as Gen Prayut is known, no longer works. Increasingly, his sarcastic jokes are beginning to sound rude and witless, particularly among anti-Thaksin activists now disillusioned with the regime and its inability to listen.

Listening is not only a way to win friends, but a crucial quality of a leader. Woodrow Wilson's quote is never out of date: "The ear of the leader must ring with the voices of the people."