Can netbooks ride the tablet onslaught in the portable computing market?

Although tablets have stolen the tech spotlight of late, notebook sales have continued to tick over. They offer users more power under the bonnet, similar screen dimensions and way more functionality than their tablet rivals, not to mention more bang for the baht.

But is there room for three devices _ notebooks, tablets and netbooks _ in the portable computing market?

As Apple works on the next iteration of the iPad, RIM and others are doing the same, while notebooks maintain their popularity. So what of the netbook class that is wedged between these two powerhouses?

Let's take a look at the new Toshiba NB520 to see if netbooks can endure the tablet onslaught.

To reinvigorate the netbook market, Toshiba has done two things to its new netbook series.

First, it has moved away from the utilitarian design of many portable computers, going for something different and striking, with mixed results. The brushed metal texture on the outer shell gives the device a stylish feel without boosting its weight, which is steady at around 1.3kg. This isn't too intimidating, but heavier than the Apple iPad (730g) and feathery Samsung Galaxy Tab (380g).

The other improvement comes by way of audio capability. The device has been dubbed a "netbook for music lovers" by the manufacturer, and the Harman/Kardon speakers are nicely integrated into the palm rests (usually dead space on notebooks).

These two new elements combine to give the netbook class a new face, with promising results. But can the spec under the bonnet match the exterior? 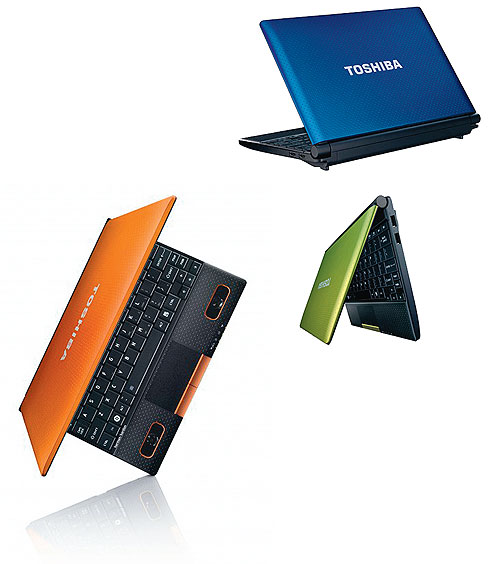 A big boost to the netbook's potential is the adoption of the new dual core Intel Atom Processor N550, with a 1MB cache clocked at 1.50GHz.

Criticised for being underpowered in the past, netbooks can now come into their own with this new technology for ultra-portable class devices. However, the bundled 1GB of RAM could do with an upgrade to 2GB in order to get more out of the processor.

The other crucial spec is the screen, which is a 10.1-inch WSVGA Clear SuperView TFT on the NB520, with a 1,024x600 resolution. It offers clear visuals, but lacks brightness, and isn't suitable for outdoor use as it reflects direct sunlight.

Driving the Harman/Kardon speakers is a Dolby Advanced Audio system with Intel High-definition Audio support, steering the multimedia capabilities of portable computing in a promising direction.

The NB520 ships with Windows 7 Starter, which has a few new features that dovetail nicely with the netbook's spec. An extra sleep function allows the unit to power down but keep the speakers active for an MP3 player, or other device. The speakers themselves offer 2W each, and provide better sound quality than any other netbook on the market. Even the bass can be heard, with better quality than either the iPad or Galaxy Tab _ a big plus here for netbooks.

The keyboard is undersized but comfortable to use, with good key recoil offering a typing experience that is still ahead of the virtual tablet keyboards. The multi-touch trackpad is sensitive enough and the track buttons offer good feedback.

Also on the positive side, the battery life is great, offering a day's heavy use on a single charge, and up to 10 hours when used lightly _ cruical for netbooks if they are to compete.

The Toshiba NB520 represents a welcome new direction for netbooks, making the device ideal for more power-hungry portable users. As the technology evolves, it seems that the notebook class might be under more threat than its netbook offshoot.

In the NB520, users will like the multimedia potential, unique design, good battery life and improved power, but might be put off by the slightly dull screen and moderate price.

Is the model a tablet killer? Not quite, but it offers more functionality at a significantly lower price than a tablet, albeit without the cool factor or touchscreen. But the future for netbooks looks to be safe for the moment, while tablets try to find their position in the portable computing market.

The Toshiba NB520 will be available by the end of the month in warm brown, lime green, sunlight copper or turquoise for 14,900 baht, from major retailers. Email

Big Tech Companies Brace for a Wave of Regulation