Cuba accused the United States on Monday of enabling illegal Internet connections in its territory and said several people were arrested in April for profiting from the wireless networks. 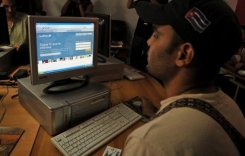 A Cuban pro-government blogger participates in a debate about their work, in July 2001 in Havana. Cuba accused the United States on Monday of enabling illegal Internet connections in its territory and said several people were arrested in April for profiting from the wireless networks.

The official communist party newspaper Granma said those arrested, who were not identified, "had for some time and without any legal authorization, been installing wireless networks for profit."

Using satellite connections to the Internet and equipment that was either stolen or brought to the island illegally, they set up a service to receive international telephone calls that bypassed the state telephone monopoly ETECSA.

"This activity is financed by the United States, which is where the necessary means and tools come from, evading the established controls," the newspaper charged.

Cuba has restricted access to the Internet, giving priority to universities, research centers, state entities and professionals like doctors and journalists.

Because of the US embargo, Cuba cannot connect to the underwater fiber optic cables that pass near the island, leaving satellite connections with high rates and narrow bandwidths as the main option available to Cuban Internet users.

To overcome those limitations, a Cuban-Venezuelan company laid an underwater cable between the two countries in February. It was supposed to have been activated in July, but it has been delayed for reasons the government has yet to explain.

Cuban authorities have previously accused the United States of illegally introducing technology in the island to enable the creation of wireless networks outside state control.

One such case was that of US government contractor Alan Gross, who was arrested in December 2009 and sentenced to 15 years prison for bringing IT equipment into the country and delivering it to various people.

"Cuba has every right to safeguard its radio-electronic sovereignty. Those who try to evade it will bear the weight of the corresponding administrative rules and criminal law," Granma said.