Dhanin Chearavanont was known for years as Thailand’s second-richest man. As the chairman and public face of Charoen Pokphand Group, the country’s largest agricultural company, Mr Dhanin was credited with a $12.3 billion fortune for managing his family’s interests in more than a dozen publicly traded companies, including a Thai mobile phone operator and the country’s 7-Eleven chain. 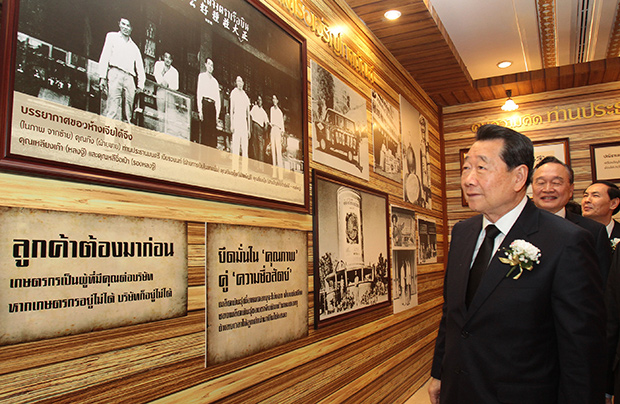 Dhanin Chearavanont, chairman of Charoen Pokphand Group, reviews the family and business history at the company's 60th anniversary last year. His three older brothers hold nearly equal stakes in the family-run company, but have long stayed off-camera and out of the limelight.

Regulatory filings with the Stock Exchange of Thailand show his lesser-known older brothers are also billionaires and share in the family's wealth. Mr Dhanin, 75, and his siblings Jaran Chiaravanont, Montri Jiaravanont and Sumet Jiaravanon have almost equal stakes in Charoen Pokphand, according to the filings.

The brothers -- all of whom spell their last names differently -- each have a net worth of more than $2 billion, according to the Bloomberg Billionaires Index.

"Dhanin is the star of the group," Yupana Wiwattanakantang, associate professor at the National University of Singapore's Business School, said by phone. "He built it up. His brothers are not very well known, even in Thailand."

Mr Dhanin is the fourth son of Chia Ek Chor, who started the business as a seed shop in Bangkok's Chinatown with his brother in 1921 after arriving from China. Because it's unusual for Mr Dhanin, as the youngest son, to head a Chinese family business, sharing the fortune helps maintain harmony and unity, Ms Yupana, who teaches a course on family businesses, said.

Mr Jaran and Mr Montri, the older brothers, both hold the titles of honorary chairman, and Mr Sumet is executive chairman, according to the Bangkok-based group's website. Mr Sumet and Mr Dhanin each owns 12.96% of Charoen Pokphand, according to filings. Mr Jaran has a 12.76% interest and Mr Montri a 12.63% stake.

Viranon Futrakul, a spokesman for Charoen Pokphand who confirmed the brothers' stakes, said he's unable to provide biographical information about Mr Dhanin's brothers and their contribution to the businesses.

"They would like their information to remain private," he said in an e-mail.

When Chinese leader Deng Xiaoping opened the country's economy in 1979, the group was its first foreign investor, registering its business there as No. 001. The connection was cemented almost two years ago when the group invested $9.4 billion to become the largest investor in Hong Kong-listed Ping An Insurance Group Co, China's second-biggest insurer.

Mr Dhanin planned to retire by age 58, according to a case study on the group by Harvard Business School led by professor William C Kirby. Faced with the Asian financial crisis triggered by the Thai baht's devaluation in July 1997, he changed his mind and negotiated with his brothers to take charge again. As the family empire faltered under foreign loans, Mr Dhanin froze debt payments, halted dozens of ventures and sold assets to save the group.

The businesses also survived the country's recent political turmoil. CP All, the brothers' most valuable holding, has gained about 7% since May 22, when the Thai army took over power for the twelfth time since 1932 amid escalating tensions between opposition politicians and former Prime Minister Yingluck Shinawatra's party.

The family is the biggest shareholder of CP All, which runs more than 7,700 7-Eleven stores in Thailand, and Charoen Pokphand Foods Pcl, the country's largest meat producer. Charoen Pokphand Foods also makes ready-to-eat and frozen food, including shrimp wonton and grilled teriyaki chicken, sold at its 7-Eleven and CP Freshmart outlets, and exported to more than 40 countries. The group also controls telecommunications company True Corp.

Mr Jaran, the eldest who is nine years older than Mr Dhanin, was the first chairman, according to his three-sentence biography on the group's website in China. He's Mr Dhanin's "best partner" in the planning and management of the business, according to the website. 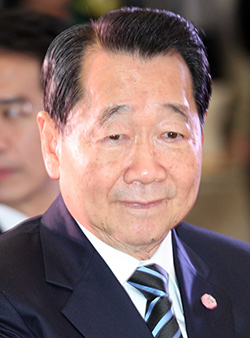 Mr Montri, eight years Mr Dhanin's senior, was director in some of the conglomerate's agricultural companies, including C.P. Feed Mill Co, and was vice president of Charoen Pokphand in 1980, according to the website.

Mr Sumet, 79, once ran Hong Kong-listed CP Pokphand Co, the Chinese arm of Charoen Pokphand Group, and its business in Indonesia, according to the website.

Mr Dhanin, who is also chief executive officer, joined the group when he was about 25. He became its president in 1970 and chairman 19 years later.

"It was a testament to strong family ties that his three elder brothers were willing to recognize Mr Dhanin's talents and relinquish managerial responsibilities entirely to him even though they maintained their co-equal shareholdings in CP," according to the Harvard case study.

When the business expanded in 1978, Mr Dhanin brought in non-family management so that the group would be run professionally, according to the study.

"Although met with initial resistance, as the transformation affected the standing of his two eldest brothers, Mr Dhanin's brothers came to understand and agree to the changes," the study said.

As the businesses brought in professional management, Mr Dhanin and his brothers agreed that wives, sisters and daughters wouldn't be involved in the business. With about 300,000 employees, Charoen Pokphand had about $41 billion in revenue last year, according to its website.

"The operations seem to be in the hands of independent managers," said Nirgunan Tiruchelvam, a Singapore-based analyst with Standard Chartered Plc who covers four of the group's companies, including Charoen Pokphand Foods and CP All. "It doesn't seem to be a company where the family is playing a leading role in the operations."