The runaway success of the messaging app has only whetted the company's appetite for new features and services.

People are constantly increasing their understanding of visual and non-verbal communication and how they are influenced by it. 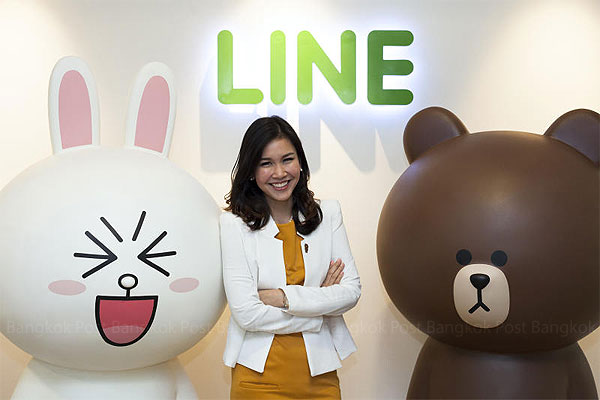 Sending pictures and stickers to express themselves and their emotions gives users a new method of mobile communication that goes beyond typing. It also represents the power of visual and non-verbal communication in the digital world.

Sticker-based apps like Line and WeChat have transformed mobile messaging. And the best part is, "it's free".

As of June, Line had signed up 450 million users worldwide, almost 90% of them outside of Japan. WhatsApp revealed in March that it had 465 million monthly active users, while WeChat's parent company, Tencent, said its number of monthly active users reached 355 million at year-end 2013.

The overwhelming success of Line has made it the most popular social messaging network in Thailand. The company continues to seek more opportunities to expand its customer base by not limiting the business to just chat features.

Line, which has grown almost three times faster than Facebook did after its creation, is planning to throw Skype off its perch at the top of the smartphone communications market, using a bear and a rabbit to seduce Thai consumers.

Launched as a basic messenger to guarantee easy interaction, Line has gradually added more functions, including a Facebook-style timeline to distinguish itself from rival communications apps. It successfully branched into the games market. Its camera app, with beauty editing functions to smooth appearances, has generated 50 million downloads, and last week the company added a video feature, letting users take up to 10-second clips.

Thailand marks the fourth location of Line's official offices after setting up shop in Japan, South Korea and Taiwan. As of May, Thailand has the second most Line users globally with 24 million, trailing Japan's 51 million.

Varadee Vasavananda, a spokeswoman who has been with Line since its first venture in the country, says the number of Line users is growing exponentially as the number of smartphone users surges in the Thai market.

The ranks will continue to grow as wireless 3G high-speed broadband and the imminent 4G become more accessible.

Thailand is a strategic destination for Line to expand its footprint in Asia. The company plans to increase its number of employees here to 100 for localisation and business development with partners.

"This year we plan to have 35 million Line users in Thailand, an increase from 18 million users in 2013," Ms Varadee said, adding that the company expects to generate 500 million users worldwide this year, up from 380 million in 2013.

Line Thailand will follow the global trend by focusing 60% of its resources on game services this year. It is aggressively promoting its popular Cookie Run game, which had 23 million downloads in Thailand as of April.

Line has widened its marketing revenue to feature official accounts, stickers and themes, and it recently introduced Line Call in Thailand. The flat-rate, low-cost voice service lets users make calls to fixed-line and mobile phones. Before, users could make phone calls only to other Line users, free of charge.

Another feature is free coins that can be redeemed for Line stickers. "We will introduce a short video advertising clip and give free stickers as a reward to users," Ms Varadee said.

She notes that one key success of Line Thailand is the line-up of irresistibly cute cartoon characters that have become the face of Line: Moon, Cony, Brown, James, Jessica and Sally.

"Thai users really love our characters. They choose to use them because it allows them to express their emotions without using words — a borderless communication without any language barriers — while each cartoon character is unique and reflects the user's personal character."

The company has its own design team to bring these characters to life through countless stickers. What most people don't know is that the characters are actually styled and named after Line employees.

The words expressed by some stickers have been localised to Thai slang, attracting teenagers and netizens.

The company in May launched its Creators Market at https://creator.line.me, giving users a chance to make their own stickers and sell them via Line Store.

Line Store is available in Thailand, Japan, Taiwan and Indonesia. The company shares half of sticker sales revenue with the sticker creator.

Line is also promoting mobile commerce on its Hot Deal and Flash services. Plans call for an app called Line Mall, a marketplace for users to upload and sell products without a listing fee, with Line taking a 10% cut of the revenue.

Ms Varadee says that while Line Thailand is successful and has the biggest share of messaging app users in the country, the company continues to introduce new features and services to lock in the customer base as competition intensifies.

She foresees messaging apps becoming the main mobile communication channel and an alternative for advertisers to communicate with consumers, especially in the telecom, food and cosmetics sectors.

"Social networking apps are strategic tools for business organisations to communicate with their customers quickly and efficiently," Ms Varadee said.

But she acknowledged that the arrival of digital TV will be a challenge to the online mobile network.

Line began as a response to the tsunami disaster of March 2011. Damaged telecom infrastructure forced employees at NHN Japan, a unit of South Korea's NHN Corporation, to rely on internet-based communication. The company's engineers developed Line as a result. Soon enough, Line debuted for public use in June 2011 and reached 100 million users within 18 months of its release.

On Feb 6, 2013, the success of Line led NHN Japan to announce a spin-off company, known today as Line Corporation and based in Japan. Line Corporation continues to develop internet resources such as Line and the Naver Japan search portal.