The last tiger has been removed by the Department of National Parks, Wildlife and Plant Conservation (DNP), and now the entire 1,419-rai Wat Pa Luang Ta Maha Bua faces seizure and the wrecking ball. (Reuters photo)

Officially known as Wat Pa Luang Ta Maha Bua, the temple now faces charges of forest encroachment after authorities conducted an inspection on Sunday that found the temple covered an area of 1,419 rai, far beyond the 391 granted by the Agricultural Land Reform Office (Alro) to the temple. The rest allegedly sits on a forest reserve.

The inspection was conducted by officials from Alro, the Royal Forestry Department, the Kanchanaburi provincial land office and police. Authorities agreed the temple violated the forestry law, the land use law and the environment law.

According to authorities, of the 1,419 rai occupied by the temple, at least 931 encroach on forest areas. Authorities found three structures on the land: a bathroom, a warehouse and an unfinished viharn, a temple hall that houses a statue of the Buddha.

Suphap Korfak, chief of tambon Singha, has been assigned to supervise the area and keep anyone from dismantling the structures as legal action is taken against the temple.

Alro has also uncovered misuse of a 391-rai plot and is gearing up to evict the occupants while authorities gather evidence linking the plot to the illicit wildlife trade, authorities said.

Alro allocated the land as requested by the Office of National Buddhism (ONB). The temple kept almost 150 tigers and other wild animals in the compound.

Adisorn Nuchdamrong, deputy chief of the Department of National Parks, Wildlife and Plant Conservation (DNP), said Alro is expected to send a letter to the ONB this week, seeking to revoke the temple's right to use the land while forestry officials will press charges of forest encroachment. 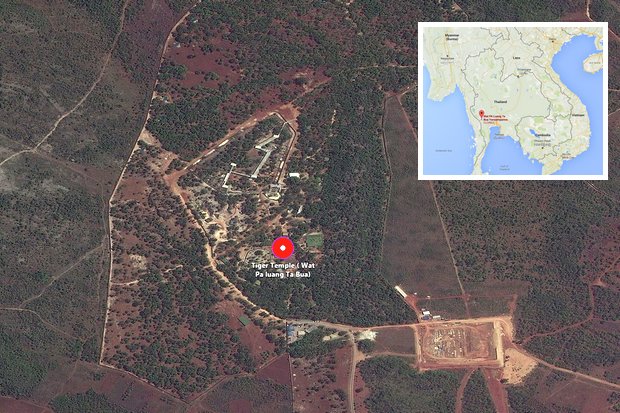 Chayapong Pongsida, deputy ONB chief, said a probe will be launched into the claims and if found to be true the temple will be relocated or closed.

He said the department will work with authorities to expand the investigation as the temple is suspected of engaging in illicit wildlife trading.

The temple denies the trafficking allegations.

According to Sai Yok police superintendent Pol Col Bundit Muangsukham, eight counts of charges, including the latest for forest encroachment, have been lodged against five people, including three monks, over the past week.

He said police have not yet summoned the abbot, Phra Sutthi Sarathera, known as Luang Ta Chan, for questioning but are expected to do so soon.

The abbot is said to have left the temple on May 29, one day before the relocation of the tigers. He was driven by a man identified only as Boonlue and his whereabouts remained unknown.

The long list of charges follow the DNP's operation to relocate 147 tigers from the temple early last week after the Kanchanaburi Provincial Court approved a warrant for the department to search the temple.

Authorities then found two tigers not on the temple's original list, bringing the total number of tigers in the temple's possession to 149. The tigers were moved to Khao Pratap Chang and Khao Son wildlife breeding centres in the Chom Boeng district of Ratchaburi.

Authorities later discovered the carcasses of 70 tiger cubs, two tiger pelts, a large number of talismans made from tiger carcasses, six hornbills and 27 sheets of processed wood, including teak. Plastic bottles with labels advertising their contents as supplements with "tiger power" were also found.

Mr Adisorn said DNA tests of the tigers and carcasses will be conducted and all the dead cubs will undergo an autopsy to determine the cause of death. Results are expected in two weeks.

He said there are still some animals left in the temple that need to be relocated including a horse, wild boar, buffaloes, an antelope and a barking deer.

National police chief Pol Gen Chakthip Chaijinda said police will investigate whether the temple is involved in wildlife trafficking and will step up a crackdown on illegal possession of wild and protected animals.

He said the DNP may have to consider revoking the temple's zoo licence.