Monta "Ying Kai" Yokrattanakan is brought to the Criminal Court on July 7, where she was remanded in custody without bail. (Photo by Pornprom Sartrabhaya)

The Criminal Court and the military court issued arrest warrants for Monta "Ying Kai" Yokrattanakan for human trafficking and lese majeste on Thursday, as more people came forward to level accusations against her.

Pol Col Chakrit Sawasdee, deputy commander of the Crime Suppression Division (CSD), said his division obtained another arrest warrant for Ms Monta from the military court for another lese majeste case last year. It related to a threat made against a former maid-cum-student.

With the new arrest warrants, Ms Monta, 58, would be further held for interrogation, he said.

She has been detained at the Central Women's Correctional Institution in Bangkok since July 7, facing charges of laying false complaints of theft against maids who refused her orders to take up jobs she arranged overseas, attempted human trafficking, and lese majeste in claiming to have the royally bestowed title of Khunying (lady).

At CSD headquarters in Bangkok on Thursday, Saiyai Yingphum, 87, laid a complaint that Ms Monta, claiming to be a Khunying, and a monk, claiming to be the abbot of Wat Yeepa in Ayutthaya province, had told her they could secure a royal decoration for her.

She had then transferred money totalling 2.8 million baht to Ms Monta, only to find out later she was cheated.

Phra Samu Chavalit, assistant abbot of Wat Thasung Thaksinaram in Ayutthaya, accompanied her. He said Wat Yeepa was actually a deserted temple, and he was ordered to dismantle it.

In response, Ms Monta and the self-proclaimed abbot of Wat Yeepa, together with a gang of men, had repeatedly threatened him in 2014 and 2015, the assistant abbot said.

Another complainant, Warisara Kaewplang, 56, said Ms Monta, who at the time lived with a husband in Phitsanulok province, had hired her restaurant to provide free meals to local students between 1993 and 1997, but Ms Monta failed to pay the bills, which totalled about 200,000 baht.

When she complained about the unpaid bills, Ms Monta had responded with multiple extortion and defamation charges, said Mrs Warisara, who is now a member of the provincial anti-corruption committee in Surin province. 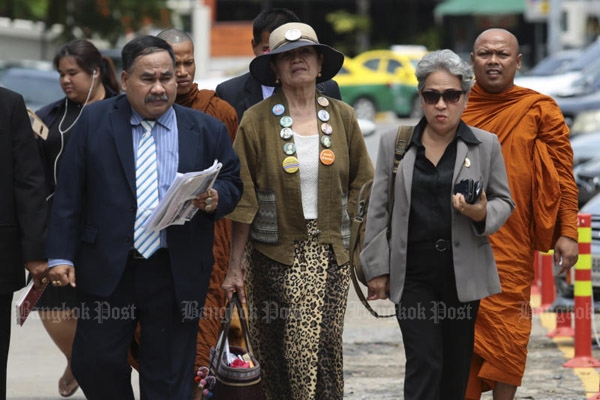