A bomb exploded in front of the marine police office and another one in front of the police station in Muang district of Surat Thani on Friday, killing one person and injuring three. 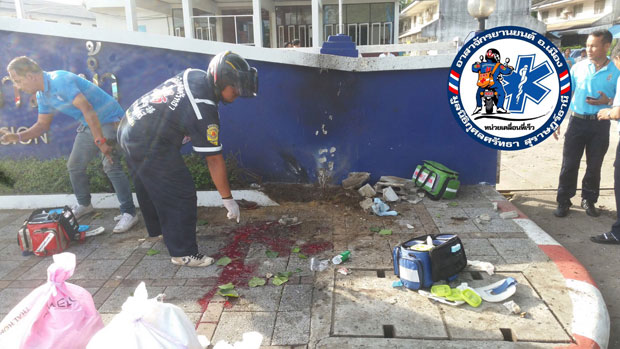 A rescue worker points to bloodstains at the site of the explosion outside the Marine Police Division. (Photo by the Motorcycle Volunteer team of the Kusol Sattha Foundation in Surat Thani)

Pol Col Sirichai Songwasin said the first bomb went off at 8.02am at the Thai Marine Police Division. It was planted under a tree in front of the office.

The second bomb exploded exactly 30 minutes later in front of the Muang district police station, about 400 metres from the first blast. No one was injured from this incident.

Police said both bombs were triggered by mobile phones.