A police bomb disposal officer checks evidence after the blasts near the Hua Hin clock tower on Friday. (Photo by Pattanapong Hirunard)

The country is on high alert following a total of 13 bombing incidents that killed four people and injured 35 others in five southern provinces between Wednesday and Friday morning.

In the beach resort town of Hua Hin in Prachuap Khiri Khan, two blasts on Friday came just hours after a Thai food vendor was killed and 20 people injured, including foreign tourists, by two explosions on Thursday night.

All of the bombs were reportedly detonated by mobile phone signals. Explosive Ordnance Disposal (EOD) and forensic teams were investigating the types of bombs and trying to determine the motives behind the attacks. Local TV stations reported two men were detained for questioning on Friday.

The foreigners wounded in the Thursday night attack in Hua Hin were three Germans, three Italians, an Austrian and three Dutch nationals.

Prime Minister Prayut Chan-o-cha said the bombings in Hua Hin and four other locations -- Phuket, Surat Thani, Trang and Phangnga -- were "an attempt to create chaos and confusion".

"Why have the bombs occurred as our country is heading toward stability, a better economy and tourism -- and who did it? You have to find out," the premier told reporters on Friday.

Government spokesman Sansern Kaewkamnerd advanced the theory that those behind the blasts could be people who "lost benefits" because of the outcome of Sunday's referendum, in which 61% of voters approved a new constitution that will entrench the military's role in government for years to come.

Finger-pointing after such incidents usually implicates followers of self-exiled ex-premier Thaksin Shinawatra. But Friday's blasts were in anti-Thaksin regions, and all occurred in provinces where the draft charter was approved by large majorities.

As they did following the Erawan Shrine blast that killed 20 people in Bangkok last year, police on Friday went out of their way to insist that there was no terrorist link. Mere mention of the word carries the risk of severely harming the country's vital tourism industry.

"It's too soon to jump to any conclusion," he said "But what we know for sure is that the incidents are not linked directly to any kinds of terrorism. In fact it's local sabotage and we are trying to identify those responsible behind the scenes.

"There are no conflicts in the country that may lead to terrorists being in the country. That's why we can say that these incidents are not terrorist attacks," he added.

Police also said they had not found any evidence that the blasts were coordinated or whether they were related to the long-running insurgency in Muslim-majority provinces in southern Thailand. Southern insurgents rarely conduct operations outside the three border provinces of Pattani, Yala and Narathiwat.

At a news briefing on Friday afternoon, police gave details of a total of 13 incidents. The Public Health Ministry reported four people were killed and 35 were injured.

6.30pm: Two suspected bombs were reported in Patong subdistrict in Kathu district of Phuket. They were hidden at a garment stall in Paradise Market and a garment shop in the China Town market. They were low-pressure time bombs detonated by mobile phones. The bombs were destroyed. Two men were detained for questioning.

3pm: A bomb went off at Centre Point Market in Muang district, Trang province. One man died and six were injured.

11pm: A bomb went off at the Raintree spa in Hua Hin. One woman died and 21 were injured in the two incidents in Hua Hin.

7.45am: A bomb went off at the Loma public park in Patong district, Phuket. One person was slightly injured.

8am A bomb exploded in front of the Muang Surat police station in Surat Thani. No one was injured.

8.45am A bomb went off at a traffic control box in Kathu district, Phuket. No one was injured.

9am: Two bombs went off five minutes apart in Hua Hin. They were hidden in plant pots under the town's clock tower, killing one and wounding three.

10am: Two bombs went off in front of Bang Miang in Ta Kua Pa district of Phangnga province. Two vehicles were damaged.

9.30am: A suspicious object was found in a potato-chip can in front of the Ban Thai Hotel in Phuket.

Apart from the bombings, fires were reported in five southern provinces on Friday. Authorities have yet to confirm whether they were related to the bomb attacks.

2.15am: A fire gutted a weekend market, a popular shopping venue among tourists, in Khao Lak, Phangnga.

3am: A fire broke out at a garment-souvenir shop in Ao Nang, Krabi.

3.30am: A fire broke out at the Taveesin Plastic shophouse on Kanchanavithee Road in Surat Thani. The damage was estimated at 10 million baht.

4.00am: A fire burned down the Lee Mart Super Ka Song, formerly Diamond Store, on Satanee Road in Trang. No one was injured. Damage was estimated at 100 million baht.

8am: A fire broke out in the snack section of a Tesco Lotus store in Muang district, Nakhon Si Thammarat, causing damage worth about 100,000 baht. There were no casualties.

Late Friday morning, the US embassy issued a "security message for US citizens" on the bombings.

"Thai officials have identified no US citizens among the injured victims," it said. US "travellers to the area should avoid the affected areas, review your personal security plans; remain aware of your surroundings, including local events; and monitor local news stations for updates."

Germany's foreign ministry said on Friday that further attacks may hit the country.

"Further attacks cannot be ruled out. Therefore the foreign ministry advises extreme caution. People travelling to Thailand are recommended to avoid public places and crowds of people, to follow the media closely," the ministry said in its travel advisory. 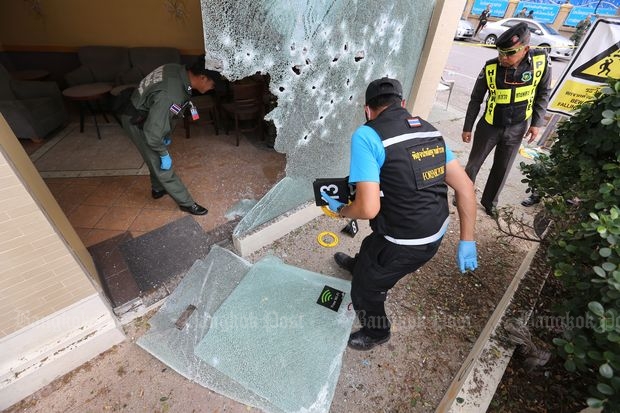 Authorities check the damage caused by the bombs at the Hua Hin clock tower on Friday. (Photo by Pattanapong Hirunard)