PATHUM THANI: One man was hurt and four vehicles were destroyed by fire after a mini truck loaded with cooking gas cylinders overturned and caught fire in Lam Luk Ka district on Saturday morning. 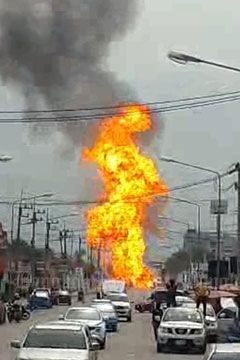 A screen grab from social media captures the moment of the explosion on Saturday in Lam Luk Ka.

The driver of the truck, which was carrying 40 liquefied petroleum gas (LPG) cylinders, sustained minor injuries from broken glass after breaking windows to escape before his vehicle burst into flames. Suksant Daenpokkorn, 33, was taken to a nearby hospital for treatment.

The incident occurred on Hathairat Road in tambon Lad Sawai of Lam Kuk Ka district, said Pol Col Montri Rattanapan, a deputy investigation chief at Khukhot police station, who was alerted at 10am on Saturday.

Five fire trucks were deployed to the scene. Firefighters hosed down the truck and three other vehicles, including two cars and one refrigerated truck, and brought the blaze under control within 30 minutes.

Weerawat Jattachan, 32, whose car was burned, told police that he saw the truck overturn shortly after it came down from a bridge on Hathairat Road. The gas cylinders exploded and caught fire, forcing him to get out of his car and flee. Other motorists on the road also ran away in panic.

Mr Suksant told police that he was on the way to deliver cooking gas cylinders to customers in the Hathairat area when one of his tyres burst, causing many cylinders to fall onto the road surface and explode. 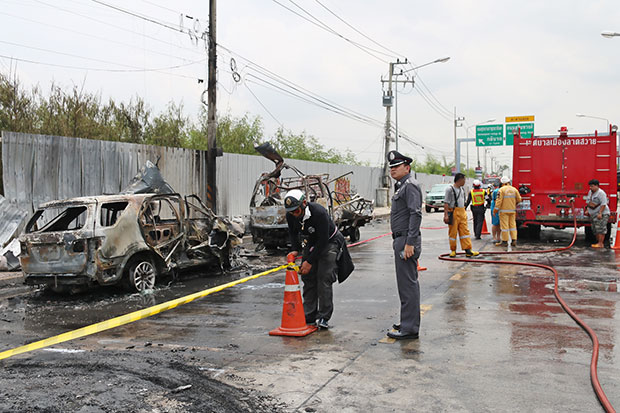 Police close a section of Hathairat Road in in Lam Luk Ka district of Pathum Thani after cooking gas cylinders exploded when a truck overturned on Saturday morning. (Photo by Pongpat Wongyala)