The motorcade transporting the body of His Majesty King Bhumibol leaves Siriraj Hospital for the Grand Palace on Friday afternoon. (Photo by Pattarapong Chatpattarasill)

The nation came to a halt on Friday afternoon as black-clad mourners gathered to witness the procession of His Majesty the King's body from Siriraj Hospital to the Grand Palace.

Tens of thousands fully occupied the four-kilometre route where the motorcade passed. Many had been at the hospital and locations along the roads since Thursday night to get the best views of the van transporting the body to the Phiman Rattaya Throne Hall inside the Grand Palace.

Many cried and waved the King's flag as the motorcade passed by. All members of the Royal Family including Her Majesty the Queen were part of the procession.

Millions more unable to come to Bangkok watched the event on television which broadcast the ceremony live on all channels when His Royal Highness Crown Prince Maha Vajiralongkorn led the event at 4.30pm. 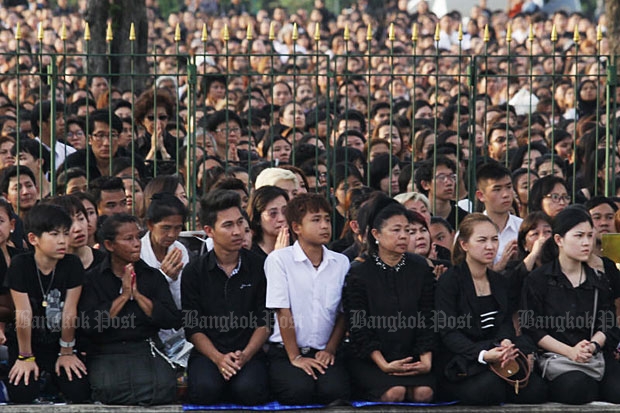 Mourners also gathered by the thousands at Sala Sahathai Samakhom Pavilion, inside the Grand Palace complex, on Friday morning to take part in a symbolic bathing rite for the King with other dignitaries including Prime Minister Prayut Chan-o-cha and cabinet ministers.

Elsewhere, provincial halls were used for people to take part in bathing rites before portraits of His Majesty, who passed away on Thursday afternoon.

The King's body is now resting at the pavilion for a chanting ceremony. The cremation date has not been announced.