Mourners prostrate themselves before a portrait of His Majesty King Bhumibol inside the Sala Sahathai Samakhom Pavilion at the Grand palace on Saturday. (Photo courtesy of the Royal Household Bureau)

Mourners will be allowed to pay their respects to the royal urn containing the body of His Majesty King Bhumibol starting from Friday, Oct 28, the Royal Household Bureau announced late Saturday.

Religious rites are taking place daily in the Phiman Rattaya Throne Hall at the Grand Palace, where the urn is resting, for 100 days in total. For the first 15 days following His Majesty's passing the hall will be closed to the general public.

On Oct 28, the public will be allowed in to pay their respects from 1pm to 4pm. Every day thereafter, the viewing hours will be 9am to 4pm.

The announcement came as huge crowds of grief-stricken people from across the country thronged the Grand Palace to pay their respects on Saturday.

The Bureau said the Grand Palace would be closed to tourists for seven days. However, it has opened the Sala Sahathai Samakhom Pavilion inside the compound, where people can sign books of condolence until Thursday.

On Saturday, people were allowed to pay their respects in the pavilion from noon to 4pm.The gates will be opened from 8.30am to 4pm on Sunday through Thursday.

Bureau officials on Saturday asked black-clad mourners to form four queues to enter the Wiset Chaisri Gate on Na Phra That Road before the gate was opened.

The body of the King was taken on Friday from Siriraj Hospital to the Phiman Rattaya Throne Hall after he passed away peacefully at the hospital on Thursday afternoon.

Areas around the Grand Palace were very crowded with people forming long queues from the Wiset Chaisri Gate to the Pin Klao Bridge. Many were seen holding portraits of the King. More people kept arriving as the afternoon wore on.

Rescue volunteers distributed drinking water and food for people waiting to enter. Officials, soldiers and police were deployed to maintain peace and order. 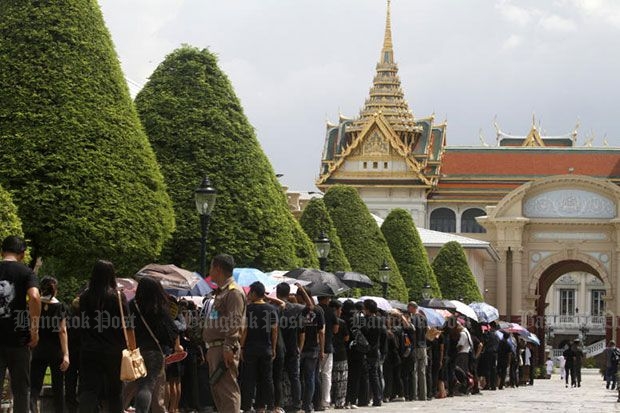 Mourners queue at the Wiset Chaisri Gate on Na Phra That Road to enter the Sala Sahathai Samakhom Pavilion to sign books of condolence on Saturday. (Photo by Thanarak Khunton)