HRH Crown Prince Maha Vajiralongkorn presided over a ceremony at the Grand Palace on Wednesday, the 7th day since the passing of King Bhumibol.

The Crown Prince led the merit-making ceremony at the Dusit Throne Hall inside the Grand Palace on the occasion of the day that marked the 7th day since the King's death.

He was joined by all royal family members, cabinet members and senior officials.

Crowds showed up at centres set up in all provinces and main districts to give morning alms to monks, a form of merit-making for the late King. 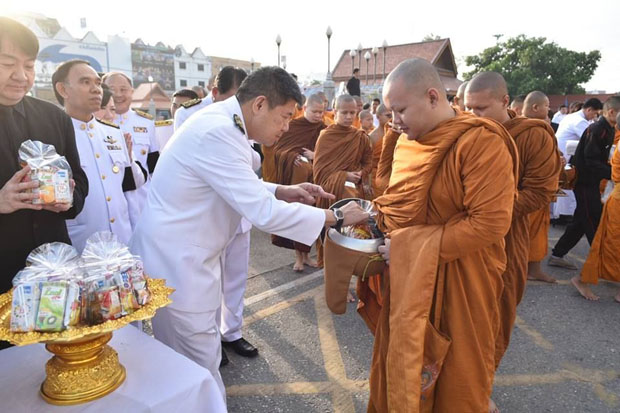 Government officials lead local residents to give alms to Buddhist monks on the 7th day since the passing of King Bhumibol in Muang district, Nakhon Ratchasima, on Wednesday. (Photo by Prasit Tangprasert)

Government and private sector representatives in the provinces handed out black bows and dyed clothes to mourners who did not have enough black clothing for the mourning period. People were also being instructed in how to make black bows and dye cloth.

Farmers from the southernmost province of Narathiwat were sending six tonnes of longkong fruit to the Grand Palace in Bangkok to give away to mourners gathered there. The fruit was expected to reach the palace on Wednesday afternoon.

On Tuesday night crowds with lit candles packed the road in front of the Klai Kangwon Palace in Hua Hin district of Prachuap Khiri Khan, in remembrance of King Bhumibol. They sang songs praising the late King and there was also a jazz concert of the late King's compositions.

As is customary, full merit-making ceremonies will be held on the 7th, 50th and 100th days after the passing of the King, before the body is cremated. After that, they will be held annually.