King Bhumibol to be known as 'the Great'
Thailand
General

King Bhumibol to be known as 'the Great'

Calendar events to change with next king

The government plans to honour His Majesty the late King with the title "the Great" after the conclusion of royal funeral rites, Prime Minister Prayut Chan-o-cha said Tuesday.

Gen Prayut stressed that the royal funeral rites must be concluded before the matter can go forward.

The cabinet must first approve the title and forward it to the Royal Household Bureau for endorsement, he said. 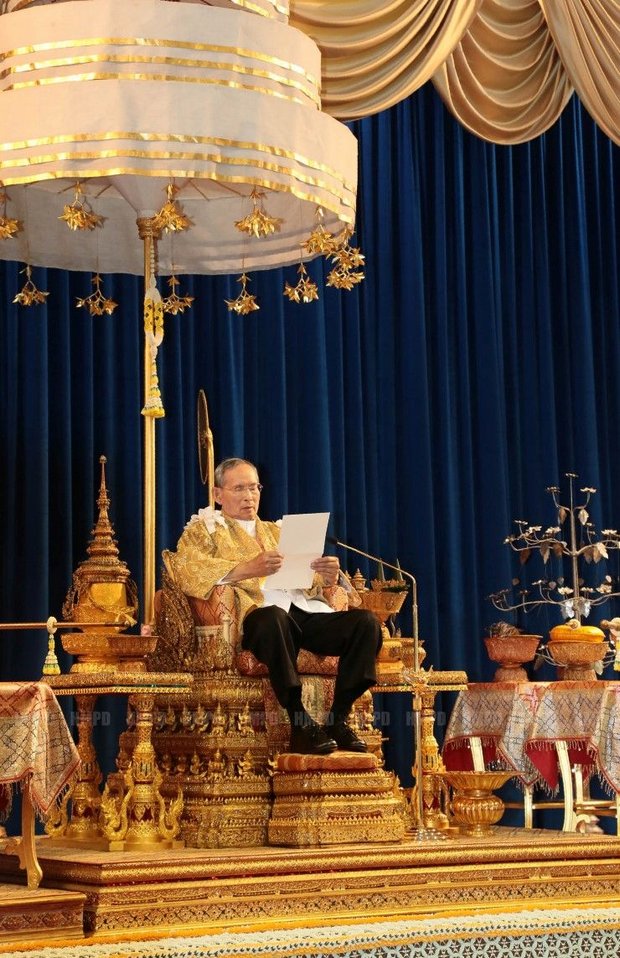 Gen Prayut said the government has long considered honouring the late King with the title "the Great", but it must wait for an appropriate time.

The prime minister also said the major events calendar will be changed when the next king ascends the throne and it is up to the Royal Household Bureau to decide on the matter.

However, Gen Prayut said he believes the dates and events on the calendar relating to the late King Rama IX will be retained in his memory, although the events may be renamed.

Major calendar events relating to the late King include Coronation Day on May 5, and his birthday on Dec 5 which had previously been celebrated every year.

Gen Prayut also said he was proud to have worked both as a soldier and as prime minister for His Majesty the King, and that he had been impressed with what the King had done for the country and the people during his 70-year reign.

Interior Minister Anupong Paojinda said City Hall and the government's situation-monitoring centre are expected to temporarily seal off the whole Sanam Luang area some time after New Year so the Fine Arts Department can move in to construct the royal crematorium.

The situation-monitoring centre will find new areas for mourners coming to pay their respects to the late King in the Grand Palace when Sanam Luang becomes off-limits, he said.

The World Health Organisation (WHO) Thailand on Tuesday posted on its Facebook page an eight-minute, 37-second clip featuring contributions His Majesty the late King had made to public health in Thailand.

"For all of us at WHO, His Majesty is an inspiration, as he should be for all other leaders. His leadership and strong commitment to public health exemplified the most fundamental principle of Health for All People, and set a high standard to which we should all strive and build upon.

"His Majesty was a significant role model nationally and globally in addressing the most pressing public health issues of his time.

"In improving the public health of Thailand, we will all continue to serve the legacy of His Majesty, who will always be remembered not only as a champion for health, but also as the people's King," WHO Thailand wrote.

Kamol Rodklai, secretary-general of the Office of the Education Council, said a committee has been set up to compile the late King's speeches and remarks on education during various occasions.

It has been found that the late King gave more than 3,000 speeches related to education during his 70-year reign.

The committee will narrow them down to 89 for publication in 5,000 books and on 35,000 CDs for distribution to educational institutions, Mr Kamol said.

Cherm Seng-iad, a convict jailed for extortion and abduction in the South, set out Tuesday from his home in Pa Phayom district of southern Phatthalung province to walk to the Grand Palace in Bangkok to pay his respects to His Majesty the late King.

Cherm said he was arrested and convicted several times in 1974, 1981 and 2014 and he petitioned for royal pardons, which were granted each time.

He said he was last released on a royal pardon on Aug 19, and that he owed a debt of gratitude to the late King and this is the least he could do to honour the monarch, he said.

The government will organise activities called Ruam Palang Haeng Khwam Pakdi (Unite to show allegiance to the King) to honour the late King across the country next Tuesday, following a month of national mourning.

Speaking after the weekly cabinet meeting, Col Athisit Chainuwat, assistant government spokesman, said a number of public activities will be held both within as well as outside the country to honour the beloved late King.

In remembrance of His Majesty the King, Col Athisit said the activities included cleaning public places, visiting patients in hospitals and reading books to children with disabilities.

"The government is encouraging Thai people to participate in the event," Col Athisit said.

The activities aim to show our love for the late King and commemorate his 89th birthday early next month," he added.