Construction of funeral pyre for King set for Jan 10

The Fine Arts Department shows the design of the royal pyre for King Bhumibol Adulyadej. (Photo by Thanarak Khunton)

The Fine Arts Department has revealed the blueprint of the funeral pyre for King Bhumibol Adulyadej, with construction scheduled to start in January.

Department director-general  Anandha Chuchoti said on Monday that the structure for the funeral of the King will be 50.49 metres high, built on the ground with ponds at four corners. The ponds will display models of the Chai Pattana Foundation wind turbines, he added.

The sacred mountain is where the King’s divine spirit will return to, according to Buddhist belief.

Deputy Prime Minister Tanasak Patimapragorn, who chairs the committee, said the area where the royal pyre will be built at Sanam Luang will be sealed off for construction on Jan 10.

The Royal Ploughing Ceremony next year will still be held at Sanam Luang, but in an area separate from that set aside for the funeral ceremony of the King, he added.

Gen Tanasak said on Nov 21 that the King's cremation pyre will be built on 74.5 rai in front of the Grand Palace. 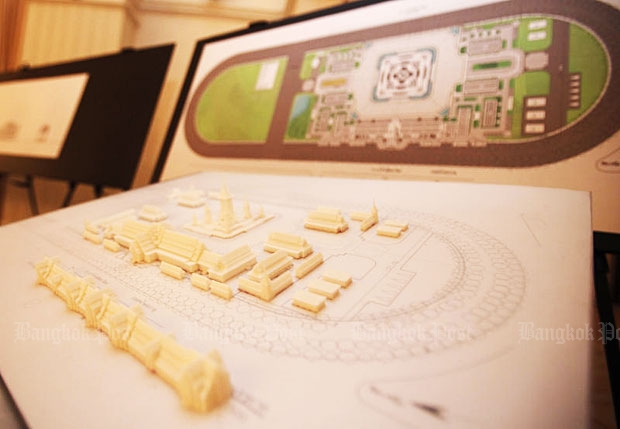 A model showing the compound at Sanam Luang where the royal pyre will be built, on display at Government House on Monday. (Photo by Thanarak Khunton)