An estimated 50,000 subjects converged Monday on the Bhumibol 1 Bridge to make merit to 999 Buddhist monks and observe 89 seconds of silence in honour of the 89th birth anniversary of King Bhumibol Adulyadej. (Photos by Wichan Charoenkiatpakul)

Thais across the nation and abroad took part in activities in tribute to the late King Bhumibol Adulyadej Monday, observing his birthday in a solemn manner and pledging to follow his teachings.

The events, organised by government agencies and public entities, ranged from alms-giving and handing out food and supplies to the poor, to making pledges to do good deeds. Candle-light ceremonies were held in the evening.

About 50,000 people packed Bhumibol Bridge 1 and Bhumibol Bridge 2 in Samut Prakan province early in the morning. They were participating in an event organised by the government, which included giving alms to 999 Buddhist monks and singing a song of remembrance.

The participants stood in silence for 89 seconds before singing The Impossible Dream, composed by King Bhumibol, and the royal anthem. They also wrote their vows of good deeds on postcards.

The Bhumibol bridges were selected to host the activity in honour of King Bhumibol Adulyadej who presided over their opening in late 2010.

The two bridges along with a flood gate were built in recognition of the late King's initiative to help ease traffic problems and the annual flooding of the lower reaches of the Chao Phraya River. 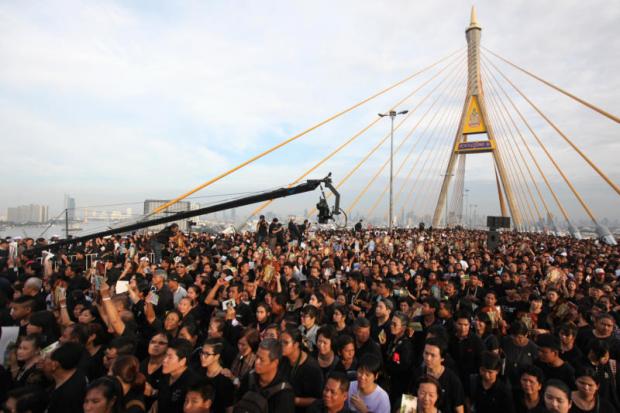 Meanwhile, at Lan Khon Muang in front of City Hall, Bangkok governor Aswin Kwanmuang led city officials and the public in alms-giving in the morning.

In the evening, the plaza played host to a musical performance in remembrance of the late King which was followed by a candle-light ceremony.

Similar religious ceremonies took place nationwide to honour the late monarch's commitment to the Thai people. In many areas, individuals announced their intention to follow the teachings of His Majesty the late King.

In the northeastern province of Buri Ram, doctors, nurses and healthcare workers from the province, Sakon Nakhon, Nakhon Ratchasima and Khon Kaen provided medical check-ups to the public free of charge.

Food vendors in various provinces turned their businesses into charity food halls for the needy, with all the good deeds in tribute to the late King.

Overseas, hundreds of Thais in the US joined a merit-making ceremony at Wat Thai Washington DC.

The event was organised by the Thai embassy in collaboration with the Thai community.

The embassy also organised an exhibition involving King Bhumibol Adulyadej's visits to the US and his sufficiency economy philosophy, handing out booklets on his work and CDs featuring royal compositions.

In Bangkok, the Royal Household Bureau reported Monday a total of more than 1.23 million people had come to pay respects to the late King in the Dusit Maha Prasat Throne Hall over the past 35 days.

According to the bureau, as of Sunday the public had donated 94.9 million baht in contributions to merit-making activities for the late King.

His Majesty King Maha Vajiralongkorn Bodindradebayavarangkun presided Monday over a merit-making ceremony at the Dusit Maha Prasat Throne Hall in tribute to the late monarch.

His Majesty also asked his staff to provide food, snacks and refreshments to mourners at Sanam Luang.

On the menu were porridge with salmon, dim-sum, fried chicken, ice cream and sandwiches.

Gen Tanasak, who chairs a government committee responsible for building the royal crematorium and surrounding structures, said a ceremony to pinpoint the centre of the crematorium will be held on Dec 26.

He said authorities will erect a fence to mark the construction area early next month.