In this image made from video, French national Georges Michel (centre) re-enacts the shooting of a compatriot to police at the scene of a shooting in Koh Samui ob Friday. (AP Photo)

SURAT THANI - Police have arrested three French nationals in connection with the killing of one of their countrymen on the southern resort island Samui.

Samui police chief Col Paitoon Krajajang said Friday the three had confessed to involvement in the Wednesday night shooting at a restaurant of 44-year-old Laurent Lacques Jean Delacherie. Police believe a business dispute was the cause. 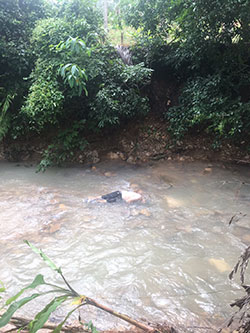 The body of a 44-year-old Frenchman is found near Tarzan waterfall on Koh Samui on Thursday evening. (Police photo via Supapong Chaolan)

Surat Thani provincial police chief Maj Gen Apichart Boonsriroj said the man suspected of carrying out the shooting, identified by his passport as Georges Michel, 65, was captured at Ban Nai junction in Don Sak district on the mainland around 4pm on Thursday while driving a pickup truck, allegedly fleeing arrest. Bloodstains were found in the back of the vehicle, police said.

The other two suspects -- Cyrille Jean Paul Larignon, owner of the restaurant where the killing took place, and Yves Claude Daniel Climent -- are accused of helping to dispose of the body, which was found floating near a waterfall.

Mr Larignon's Thai girlfriend, Nudeang Nakote, said she was present with her child when she heard the men arguing and then heard the shooting.

Shortly after the body was reported, police arrested Mr Larignon, 43, at his restaurant.

Investigators said Delacherie had talked with Mr Michel and another man, who was later identified as Mr Climent, at Mr Larignon’s restaurant on Wednesday night.

A quarrel erupted between the victim and Mr Michel, who walked out of the restaurant and returned about five minutes later with a gun. He then allegedly fired three shots at Delacherie.

Assisted by Mr Climent and Mr Larignon, Mr Michel allegedly took the body to Tarzan waterfall, where it was dropped in the stream, police said.

Mr Michel allegedly fled in the pickup truck, which has a Surat Thani licence plate. He drove the vehicle to Raja Ferry Port and crossed from Koh Samui to Don Sak on the mainland, where he was caught.