Russian arrested for trying to blow up Hua Hin ATM

PRACHUAP KHIRI KHAN -- Police arrested a 27-year-old Russian man as he was about to flee the country on charges of trying to blow up an ATM in Hua Hin district.

Pol Maj Gen Thanayut Wuthijarastharong, deputy commissioner of the Provincial Police Region 7, told a press conference on Wednesday that Konstantin Dolgov was arrested at Suvarnabhumi airport early on Tuesday morning before he could board a flight to Kazakhstan.

On Monday a motorcyclist saw him setting on fire a Krungthai Bank ATM in front of the Hua Hin land office in tambon Nong Kae about about 3.30am. The Russian then fled in a silver Isuzu pickup.

Police later found the truck and learned that the Russian had rented it. Police also found a set of gas cutting equipment dropped on Khao Hin Lek Fai in Hua Hin.

Pol Maj Gen Thanayut said Mr Dolgov had visited Thailand as a tourist four times. He claimed that unlike other ATM robbers who often cut open the machines, Mr Dolgov bored a hole through the banknote dispenser in order to fill the machine with gas and oxygen to blow it up and reach the money.

Motorcyclist Manaspong Plianpradap saw what was happening and alerted police before the plan could be carried out. Mr Dolgov allegedly confessed to the crime. 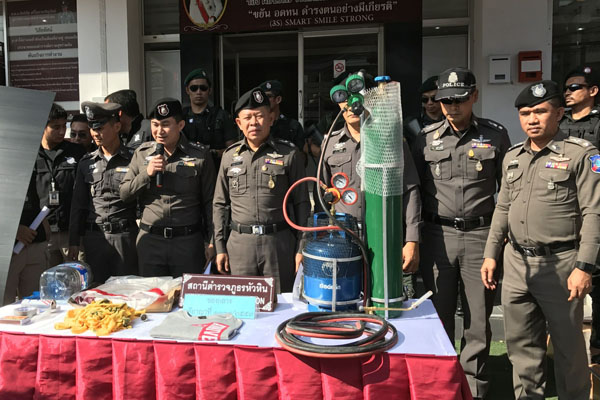