36 dead, one missing in floods, many homeless
Thailand
General

36 dead, one missing in floods, many homeless

Residents repair the flood-damaged bridge on the main entry road to their village in Bang Saphan district, Prachuap Khiri Khan on Thursday. (Photo by Chaiwat Satyaem)

Thirty-six people are confirmed dead and one is still missing in the floods that have hit 12 southern provinces since Jan 1, with devastated communities in many areas struggling to repair damage so they can resume their lives.

The floods have taken their toll on 1.2 million people of 403,478 households in 5,244 villages in 119 districts of the 12 provinces, causing damage to 17 government installations and 592 roads, 106 bridges, Disaster Prevention and Mitigation Department chief Chatchai Promlert said on Thursday.

The situation has eased in four provinces: Yala, Ranong, Pattani and Narathiwat.

In Prachuap Khiri Khan, about 2,000 households in Bang Saphan district have been badly hit by flooding

Ban Khlong Loi village in tambon Ronthong was the worst hit area. Many families have been forced out of their homes and rubber plantations inundated. Several power poles were uprooted, causing widespread blackouts.

Mukda Prakorbpran, one of affected residents at Ban Khlong Loi Village Moo 8, said  flooding struck her community on Jan 9 following days of torrential rain. Runoff streamed into her house, which was flooded in just a few minutes, she said. Her family did not have time to move their valuables or belongings from the flooded house.

Prasit Ketsaeng, assistant head of Village Moo 8, said a strong current and a huge volume of runoff made it impossible for residents to move their belongings to higher ground in time.  Now, the faced huge problems and there was still no electricity.

At Ban Wang Nam Khiew village in Bang Saphan district, residents were working their fastets to repair the damaged neck of the main bridge. 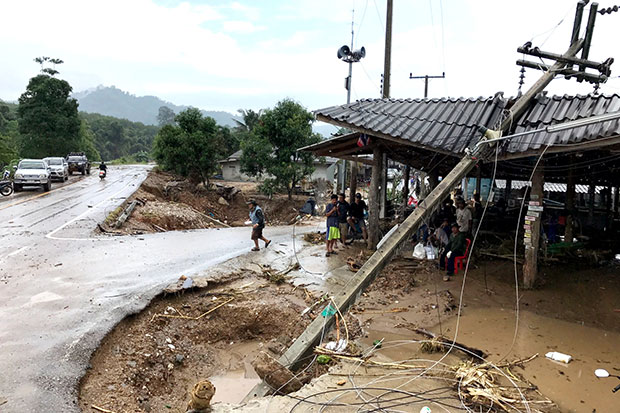 A toppled power pole, undermined by heavy rain that triggered flooding and runoff in Bang Saphan district, Prachuap Khiri Khan. The district is one of hardest hit areas. (Photo by Chaiwat Satyaem) 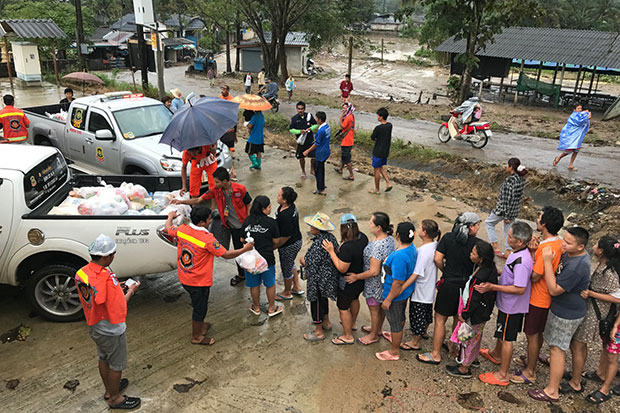 Newly chosen Chartthaipattana Party leader Varawut Silpa-archa has what it takes to be nominated as a candidate for prime minister in the next election, according to Nikorn Chamnong, a list MP who sits on the party's policy and strategic committee.

A lawyer has petitioned the Norwegian government to pressure Norway's Telenor, the parent of Total Access Communication (DTAC), to abort the planned merger with True Corporation, saying it violates Thai laws and Thailand's constitution.