Residents in Chumphon, Ranong and Nakhon Si Thammarat are being warned of heavy rainfall, flash floods and mudslides over the next few days.

Traffic jams were reported on two stretches of the road in Prachuap Khiri Khan's Bang Saphan district due to damaged bridges caused by downpours.

The stretches were between a petrol station and Wangyao Bridge and near Nong Ya Plong Bridge.

One lane on Phetkasem Road had to be temporarily closed to allow officials to build a temporary crossing near Wangyao Bridge to ease traffic on the road.

Highway department officials were conducting emergency repairs to Nong Ya Plong Bridge after the foundations were damaged by flash floods.

A mudslide caused by flash floods was also reported in Lang Suan district of Chumphon province in which many trees were uprooted and roads blocked. 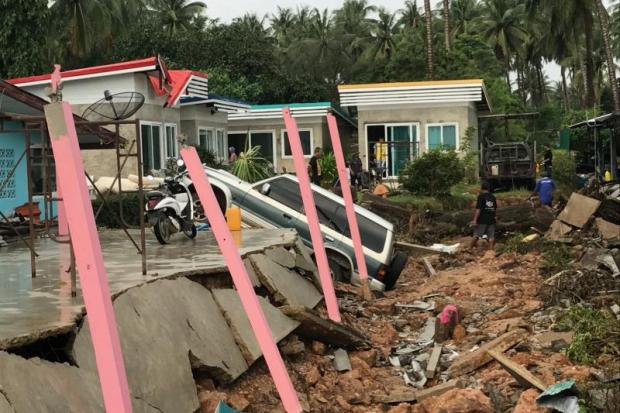 Residents examine a tourist resort near Ban Krut beach in Bang Saphan district of Prachuap Khiri Khan which was hit and damaged by heavy rain on Tuesday night. (Photo by Chaiwat Satyaem)

A fishing boat battered by storm winds was reported sunk near Ngam Island. Three Thais -- the captain and two technicians -- as well as four Myanmar crewmen were on board.

Three of the crewmen were rescued by the crew of another fishing boat near the island while the others remain missing.

Meanwhile, the Royal Irrigation Department (RID) expects the bad weather to ease and that the situation in South will likely return to normal by the end of the month. RID deputy director-general, Thongplew Kongjun, said the latest forecast from the Meteorological Department says the front causing the bad weather will leave the region over the weekend which will result in less rain.

Mr Thongplew said flood volume caused by heavy rain in 10 southern provinces over the past few days was less than half that brought by downpours in the same provinces earlier this month.

"We will see a decrease in sea levels on Friday, a decline in rainfall after this Saturday and increased efforts to discharge water into the sea. We all hope that the situation is going to return to normal by the end of this month," he said.