The government's raft of big-ticket infrastructure projects has grown to 2.2 trillion baht in value after the Transport Ministry added 28 projects worth a combined 800 billion.

After taking the 28 projects into account, 240 billion baht worth of public investment in large-scale infrastructure is expected to be disbursed and injected into the economy this year, said Finance Minister Apisak Tantivorawong.

State investment in infrastructure projects has emerged as the mainstay of the country's economic growth, while the recovery of several engines, including exports, private investment and domestic consumption, remain weak.

The Fiscal Policy Office has painted a brighter outlook for the economy this year, raising its growth forecast for gross domestic product to 3.6% from 3.4%. An acceleration in state spending will be the major contributor to the improving economy.

The Finance Ministry's think tank, however, marginally cut its estimate for the country's economic growth last year to 3.2% from 3.3%.

Mr Apisak said the 28 new projects include a further 10 routes of double-track rail projects, electric trains in the country's capital and rail routes in Greater Bangkok.

He voiced confidence that the budget disbursement for infrastructure investment would meet this year's target. 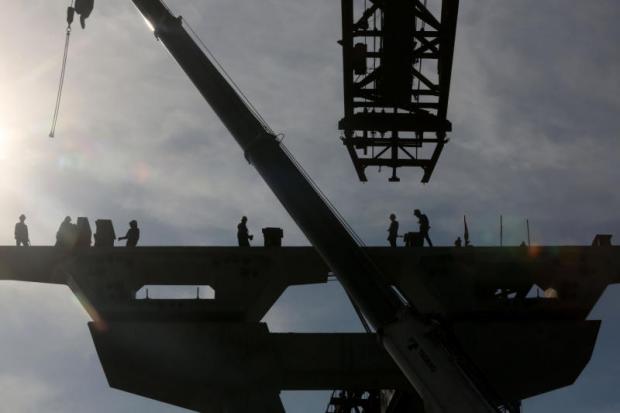 Infrastructure investment is the mainstay of the country's economic growth this year, with the slate of megaprojects rising to 2.2 trillion baht in value.

While the government only managed to take out 60% of last year's target, obstacles that dragged on the budget disbursement have already been addressed, Mr Apisak said.

The investment process under a public-private partnership scheme has been done at a faster pace, which should help the investment budget disbursement reach the target this year, he said.

Mr Apisak also said private investment is showing signs of improvement this year, as witnessed by a 195% increase in Board of Investment (BoI) applications for investment privileges in 2016.

Typically, investment under the BoI's incentives accounts for 15% of private investment.