An Islamic teacher, a local administrator and four followers have been arrested on charges of stealing the pickup truck later used in the Big C car bombing.

Lt Gen Piyawat Nakwanich, chief of the 4th army, said in Bangkok on Thursday that the senior Islamic teacher confessed he had cleaned the pickup truck of its owner's blood stains.

The 4th army chief also said the head of Ko Po tambon administrative organisation and four followers had robbed the owner of the truck.

The pickup was earlier reported registered to Nuson Kachorndam, a canvas vendor from Yala province.

Authorities say that bombers loaded the pickup with two gas cylinders stuffed with explosives, weighing about 100 kilogrammes in total, and a container of petrol, before parking it directly in front of the entrance to the Big C Supercentre in Muang Pattani district on Tuesday afternoon, shortly before it exploded.

Lt Gen Piyawat did not name the arrested suspects. He said the truck owner was murdered. 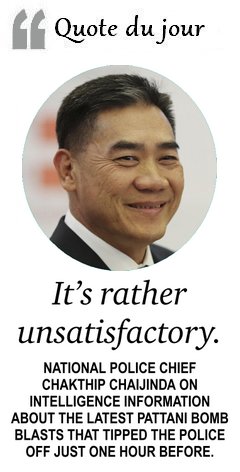 A body believed to be Mr Nuson's was found in a paddy field at Ban Ko Po in Nong Chik district of Pattani on Thursday afternoon. The southern army chief said DNA samples from the victim would be compared with those collected from bloodstains found at a local mosque named by the Islamic teacher.

Mr Nuson's wife earlier said her husband had driven to Pattani to sell canvas and she had been unable to contact him.

The 4th army chief said members of local government organisations were involved in the violence in Pattani.

"It is intended as a threat to old allies who plan to defect, and to win the confidence of new allies," Lt Gen Piyawat said.

Security authorities had been lenient at the Big C Supercentre, he added, because 90% of the customers were Muslims, many of them women and children. "We thought that Muslims were not a target, and the centre already has its own security guards," he said.

The truck bomb exploded shortly after a big firecracker detonated, causing panic. The explosion injured 61 people, four of them seriously.

Later on Thursday, Panu Uthairat, secretary of the government's committee on southern border solutions, appeared to cast doubt on the theory that the head of the Ko Po tambon administrative organisation was involved in the truck robbery. Mr Uthairat said the tambon head was being treated as a witness, since he saw people taking the body of the pickup owner to the aforementioned mosque.