Korat zoo breeding vultures to save them from extinction
Thailand
General

Korat zoo breeding vultures to save them from extinction

Vultures are on the brink of extinction in Thailand, with only 7 of the rare birds at Nakhon Ratchasima Zoo. (Photo by Prasit Tangprasert)

NAKHON RATCHASIMA - Zoo keepers have begun a programme to breed vultures and return them to their natural habitat, with the species on the verge of extinction in Thailand.

Nakhon Ratchasima Zoo official Prasert Chanklang said on Wednesday that vultures have disappeared from the wild in Thailand due to changing geographic conditions becoming unfavourable for them. Use of pesticides and chemicals on farmland also drove them away.

Now, the species is to be seen only in zoos. Nakhon Ratchasima zoo has 7 vultures -  3 males and 4 females, he said.

The zoo is trying to breed the large birds, with three pairs. One pair was seen building a nest, good news meaning that the birds were preparing to mate. Zoo staff were closely monitoring their behaviour. If the pair do mate and lay eggs it would be the first time the rare birds have been successfully bred in Thailand.

If the breeding programme is successful, the vultures will eventually be released into their natural habitat, Mr Prasert said.

Male vultures have black body plummage and females white, with red necks and feet. They take 3 years to mature, when they stand about 150cm tall and weigh 3.7 to 5.4kg, he said. 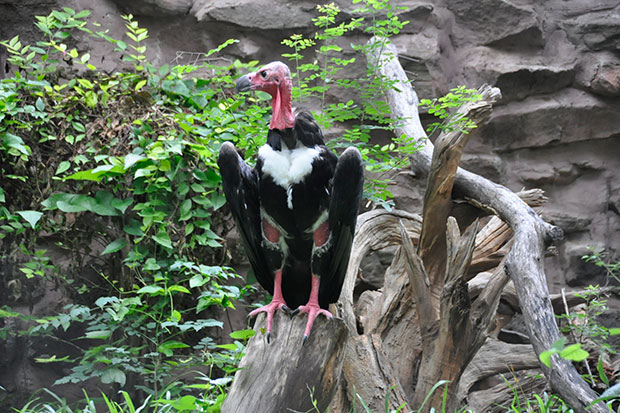