Myanmar authorities are scrambling to locate three Thai women allegedly involved in the murder of a 22-year-old karaoke bar worker, following a request from Thai authorities.

The suspects are believed to be hiding out in the country.

A source with local authorities in the northern province of Chiang Rai, bordering Myanmar, said soldiers, police and immigration officers in Tachilek, a border town in eastern Myanmar, were looking for the trio's whereabouts. The suspects at large are Preeyanuch "Preaw" Nonwangchai, 24, Kawita "Earn" Ratchada, 25, and Apiwan "Jae" Sattayabundit, 28. 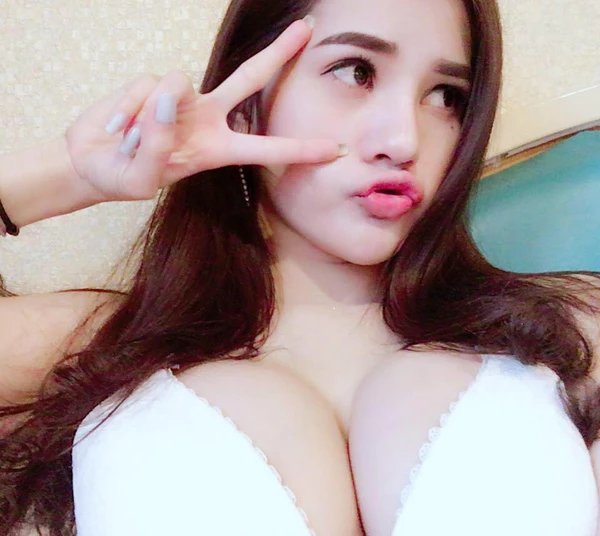 The search comes at the request of the Thailand-Myanmar Border Township Committee (TBC) and immigration officers in Mae Sai district of Chiang Rai. Thai officials in the TBC shared information on the case with Myanmar authorities.

A superintendent of Tachilek police led a team of 15 officers in a search of a karaoke bar and spa in the town as the women were said to be working there.

However, the search failed to locate them, the source said.

The owner of the establishment along with eight workers were taken in for questioning.

The workers said the trio were seen at the spa from May 25 to last Sunday. They said the suspects left on Sunday afternoon.

Myanmar officers were checking where the suspects were headed, the source noted.

According to the source, the Tachilek karaoke bar has been leased by a Thai national since January.

Scores of Thai women were brought to work there, including the three suspects.

The source said the three women went to Tachilek to work on several occasions and they were well-known among party-goers and rich locals.

Two other suspects, Wasin Namprom, 22, and his girlfriend Jidarat "Aom" Promkhun, 21, are already in police custody. 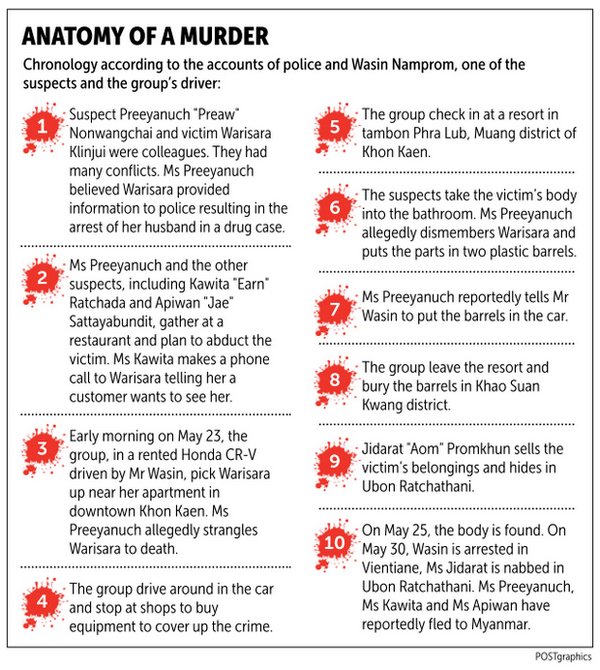 Mr Wasin was arrested at a guesthouse in Laos and handed over to Thai police on Tuesday, while Ms Jindarat was apprehended in Ubon Ratchathani on the same day.

Pol Col Pongrit Kongsirisombat, a superintendent at the Investigation Division of the Provincial Police Region 4, said police had a record of the three female suspects crossing the border at the Mae Sai immigration checkpoint to Tachilek, Myanmar, last Thursday.

According to a police source, Warisara was killed on the orders of a transnational drug network after she shared information with police implicating the syndicate and other narcotic rings in Khon Kaen.

This drew ire from the drug network and its financial backers, who then ordered Ms Preeyanuch, whom police say is also a major drug peddler in Khon Kaen, to hatch a plan to murder Warisara.

Ms Preeyanuch is allegedly popular among party-goers who favour crystal methamphetamine, or ya ice, the source said. Drug users are known to be fearful of Ms Preeyanuch's alleged narcotics network.

The four other suspects in the murder case are Ms Preeyanuch's close friends, and no one dared stop the woman from killing the victim, the source said.

Since the three suspects have fled to Myanmar, police are confident they were being helped by the drug network, the source added.

Police earlier said Mr Wasin told them Ms Preeyanuch throttled Warisara, covered her head with a plastic bag and beat her to death after the victim was abducted in a rented Honda CRV car.

The man said he drove the car for Ms Preeyanuch. 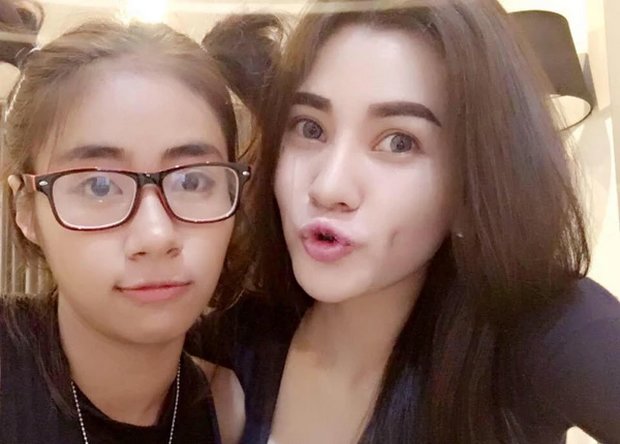 Meanwhile, Pol Lt Col Supaluek Suwanrat, deputy superintendent of Khao Suan Kwang police station, said Ms Jindarat insisted she had nothing to do with the killing.

She said Mr Wasin, Ms Preeyanuch and Ms Kawita came to see her in Bangkok on the night of May 23, and they all spend the night together, the officer said.

The following day, they went to a shopping mall in the Ram Intra area, where Mr Wasin handed Ms Jindarat a mobile phone he said belonged to Ms Preeyanuch, who wanted her to sell it, the officer said.

The phone actually belonged to the dead victim.

Ms Jindarat told police she sold it for 3,500 baht, which was handed to Mr Wasin.

On that night, Ms Apiwan joined them.

Pol Lt Col Supaluek said it is clear from the investigation that Ms Jindarat was not involved in the killing as footage taken from CCTV capturing the vehicle used in the abduction of the victim showed she was not inside.

She could have only been involved in the sale of the victim's mobile phone, the officer said.