'Samui Times' to be sued after Koh Tao death story

Surat Thani governor Auaychai Inthanak receives flowers from tourism operators on Koh Tao during a meeting on the island in Surat Thani province on Tuesday. (Photo by Supapong Chaolan)

SURAT THANI - The death case of a Belgian tourist on Koh Tao took a twist on Tuesday as provincial authorities on Tuesday targeted a news website which ran the story before it went viral.

Officials called a meeting with about 300 business operators on the island on Tuesday to contain the damage to their businesses in the wake of the story about the death of Elise Dallemagne.

They decided to assign Phangan district official Krerkkrai Songthani to file charges against the Samui Times with Koh Tao police station. The Samui Times would face a libellous lawsuit and a more serious charge of violating the Computer Crime Act for posting misinformation, prosecutor Somkuan Ruangwut said after the meeting.

Koh Tao mayor Chaiyant Turasakul supported the decision. "The coverage damages the island's reputation and we have to take decisive action not to allow foreigners or other people to attack our economy and the credibility of the country," he said. 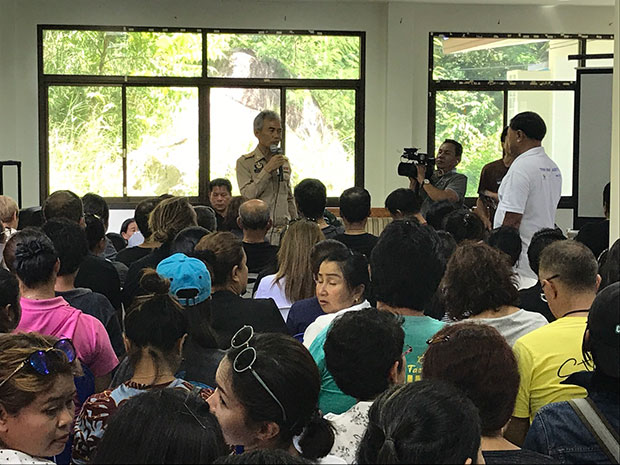 The media outlet based on Koh Samui angered authorities and tourism operators after it called Koh Tao the "death island" after many mysteriously died there, although they said only two tourists were murdered.

They referred to the murder of British tourists Hannah Witheridge and David Miller in 2014. Two workers from Myanmar were convicted and sentenced to death.

The case remains under appeal after a widely criticised police investigation.

Mr Chaiyant said the Samui Times' coverage caused misunderstanding among tourists as safety was their priority when planning a trip.

Its coverage on the death of Dallemagne, 30, before the story was taken up by other media outlets prompted police to reopen the case. They are collecting evidence and witness accounts on the island.

The 30-year-old tourist was found dead on April 27 on Koh Tao. Police have concluded that she committed suicide after two autopsy reports by Surat Thani General and the Institute of Forensic Medicine at Police General Hospital confirmed that she died from suffocation.