Buyers spend B10.7bn on Thai hotels in first half

A sign put up on the corner of Soi Sukhumvit 27 indicated that the unfinished hotel has been sold. (Supplied photos)

Direct investment in the hotel sector in Thailand reached 10.7 billion baht in the first half of 2017, with deals to buy five hotels in Bangkok and Pattaya, according to JLL Hotels & Hospitality Group.

The is around 11.45% more than the full-year investment volume in 2016 of only 9.6 billion baht, said Mike Batchelor, head of investment sales Asia.

JLL expects full-year hotel investment volume in Thailand to reach over 14 billion baht by the end of 2017. 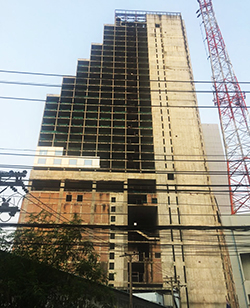 This unfinished hotel on Sukhumvit Road in downtown Bangkok will be a new Carlton hotel when it is opened in 2019.

Mr Batchelor said buyers were both domestic and regional investors, with the latest hotel acquisitions being made by Carlton Hotel Group and Hotel 81, both from Singapore.

In June, JLL facilitated Hotel 81’s acquisition of the Premier Inn portfolio, including two hotels in Bangkok and Pattaya. With a collective key count of 388, the portfolio marks Hotel 81’s first venture into the Thai market. Hotel 81 has appointed Travelodge to manage both hotels on its behalf.

In May, Carlton Hotel Group of Singapore acquired an unfinished hotel project in Bangkok for 2.4 billion baht. Planned for completion in 2019, the 342-key hotel is expected to carry the Carlton Hotel brand.

“Given that no hotels of a significant size have been traded on the main Sukhumvit Road, this deal has also set a new benchmark price,” he said.

The other two hotels sold in the first half of 2017 include Bangkok Edition Boutique Hotel and Swissotel Nai Lert Park in Bangkok. While the acquisition of the latter was announced in 2016, the transaction was completed only this year.

Last year, 16 hotels and hospitality assets worth 9.6 billion were sold in Bangkok and major provincial destinations such as Phuket, Samui, Sri Racha and Chiang Rai.