SUKHOTHAI- A wedding party in Si Samrong district was hit by a flash flood on Thursday evening, forcing guests who were dining and enjoying music to pick up their tables and flee for higher ground.

The wedding party for the young couple “Kalaya and Thammarat’’ in tambon Thap Phueng was in full swing when the Yom River burst its banks, rapidly submerging many of the community's houses.

As floodwaters descended on the wedding party, guests rushed to move tables and other belongings to higher ground, and helped the host and musicians dismantle the performance stage.

Muang municipal workers, soldiers and rescue workers raced against the clock to build sandbag walls behind the temple and lay pipes to drain water from the flooded communities, where the water level reached about 50cm on Thursday evening.

By Friday morning, the floodwaters in Muang district had abated. 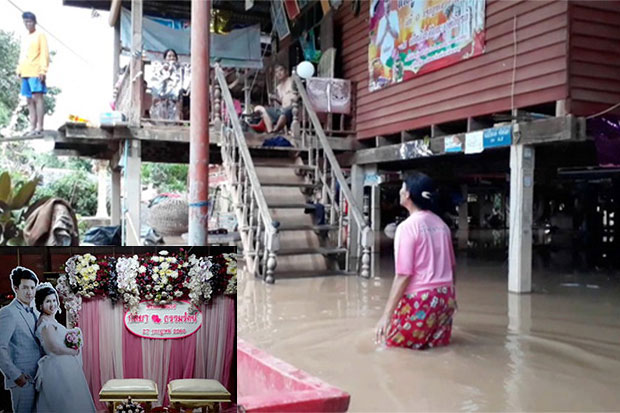 A wedding party for a young couple in Si Samrong district, Sukhothai is hit by a flash flood. (Photo by Phubes Faites)