The damaged car being used to smuggle 88 pangolins after it crashed into two other vehicles waiting at traffic lights on Road 401 in Kanchanadit district of Surat Thani on Monday. (Photo by Supapong Chaolan)

SURAT THANI - An accident at traffic lights in Kanchanadit district has proved the salvation of 88 protected pangolins probably intended for use in traditional medicines, and by restaurants, in China.

Kanchanadit police station on Monday received a report a crash involving three vehicles at traffic lights on Road 401, with the driver at fault quickly fleeing the scene. 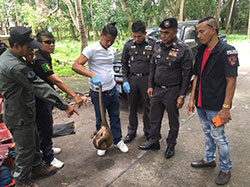 A rescuer with one of the pangolins found in the car that crashed on Monday in Surat Thani's Kanchanadit district. (Photo by Supapong Chaolan)

The drivers of the other two vehicles, a pickup truck and a sedan, said they had stopped at the intersection waiting for the lights to change when another car barrelled into them from behind, and the driver immediately ran off.

Police station chief Pol Col Chamnote Kaewkhao said a check inside the car that caused the accident found 88 pangolins in baskets and sacks.

All the seats except the driver's had been removed to clear space for the animals, he said. The licence plates were false, and police found another set of counterfeit plates in the vehicle.

The accident occurred on the Bangkok-bound side of the road. Police suspected trafficker was taking the pangolins from one of the southern border provinces to somewhere in a central province, and from there to a neighbouring country.

Pol Col Chamnote said police were working to identify and track down the fleeing driver.

The pangolins would be cared for at a wildlife station in Phangnga before being released back into the wild, the police district commander said.

Pangolins, a scaley ant eater, are protected under in the United Nations' Convention on International Trade in Endangered Species and trading in them is prohibited.

Their scales are in high demand for use in traditional Chinese medicine, and the flesh by restaurants.