Nation makes merit on the anniversary of the late monarch's passing

These photos taken at 5.43am Friday show subjects bringing fresh flowers to pay respects at the portrait of the late King at the side of the Grand Palace. (Photos Twitter/@ThaiPBSNews)

His Majesty King Maha Vajiralongkorn Bodindradebayavarangkun will preside over the merit-making ceremonies marking one year since the passing of the late King Bhumibol Adulyadej at the Grand Palace Friday and Saturday, according to the Bureau of the Royal Household.

The bureau published a document in the Royal Gazette earlier this month outlining the royal merit-making ceremonies for the late King, which will be held at the Dusit Maha Prasat Throne Hall.

His Majesty the King will travel from the Ambara Villa of Dusit Palace to the Grand Palace, where he will attend the ceremony at 5pm Friday.

The King will place his personal wreath and a wreath from Her Majesty Queen Sirikit before the late King's royal urn in the throne hall.

Thirty monks will chant prayers after which one monk will give a sermon.

The King will attend the royal merit-making ceremony again at 10.30am Saturday.

After the monks' prayers the King will offer them food. 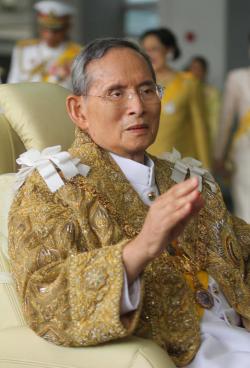 The late King Bhumibol Adulyadej. Royal merit-making ceremonies will be held Friday and Saturday to mark one year since the passing of the late King. His Majesty King Maha Vajiralongkorn Bodindradebayavarangkun will preside over the ceremonies.

Another 89 monks will be invited to pray for the late King in the throne hall.

The number matches the age of the late King, who passed away at 88. Thai culture stresses that at the time he was in his 89th year.

Meanwhile, the government has invited the public to observe 89 seconds of silence at 3.52pm Friday.

With Friday's first anniversary of his passing, the government has invited people all over the country to make merit.

Prime Minister Prayut Chan-o-cha as well as cabinet members and their spouses will offer alms to the 89 monks at Government House at 7am.

The same ceremony will be held at government offices throughout the country.

"The prime minister would like all Thais to join in the ceremony at a location near their homes and make merit for King Rama IX," assistant government spokeswoman Taksada Sangkachantra said Thursday.

Sutthipha Nacharoen, director of the general affairs division under the Bangkok Metropolitan Administration (BMA), said the BMA has designated areas for the public to place the cremation flowers at nine locations in Bangkok where the replicas of the royal cremation are situated.

More than 100 other places have also been arranged in various temples in the city for mourners to place them, Ms Sutthipha said.

She said on Oct 26 mourners will be permitted to place the flowers from 9am to 4.30pm, after which the practice will be halted as His Majesty the King will attend the royal cremation ceremony at Sanam Luang.

They can again place flowers from 6pm to 10pm, Ms Sutthipha said, adding that all will be gathered and burned in the royal pyre at Sanam Luang as well as at the replicas of the royal crematorium, except for the one in the Royal Plaza. (Story continues below photos) 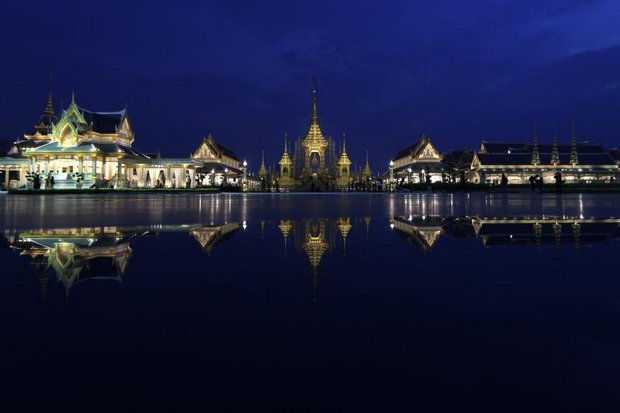 A general view of the Royal Crematorium at Sanam Luang is photographed at dusk. The royal cremation of King Bhumibol Adulyadej on Oct 26 is a national public holiday. (EPA photo) NOTE: To see this photo in full colour, press the "Switch colour tone" button at the bottom right of the browser window) 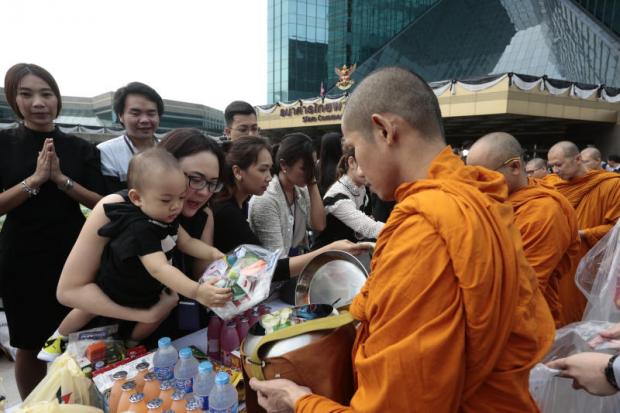 Staff of the Siam Commercial Bank and their families offer alms to monks at the bank's head office in remembrance of the late King Bhumibol Adulyadej who passed away a year ago today. Many companies, large and small, organised merit-making activities for the occasion yesterday. Patipat Janthong

Nisit Chansomwong, deputy permanent secretary of the Interior Ministry, said that replicas of the royal crematorium in 56 provinces have been completed while those in the remaining 20 provinces are nearing completion. All must be finished by Sunday.

Foreign Affairs Ministry spokeswoman Busadee Santipitaks said 94 Thai embassies and consulates overseas have sent dok mai chan to the ministry. They will be brought to the royal crematorium at Sanam Luang on Oct 26, officials said.

The Royal House of Norway announced on its official website Thursday that His Royal Highness the Crown Prince Haakon will attend the royal cremation ceremony on Oct 26.

Crown Prince Haakon is the son of King Harald and Queen Sonja of Norway.

Crown Prince Haakon and Crown Princess Mette-Marit have visited Thailand on various occasions as royal guests of the late King and Queen Sirikit.

One trip occurred during an event commemorating the 100th anniversary of diplomatic relations between Norway and Thailand in 2006.

Another took place during an event commemorating the 60th anniversary of the late King's accession to the throne.

The King of Bhutan Jigme Khesar Namgyel Wangchuck and his wife Queen Jetsun Pema will also attend, as will Japan's Prince Akishino and Princess Kiko.