Public asked to send in tips if they spot them

The Royal Thai Air Force (RTAF) has urged the public to inform the air force if they find anyone operating drones during the royal cremation ceremonies this week.

The move came after some drones were found flying near the Grand Palace during the procession rehearsals.

AVM Pongsak Semachai, spokesman for the RTAF, said some people had sent tips and photos of drones recently flown near the Grand Palace to the air force.

As a result, the air force is reiterating its previous call for cooperation from the public to refrain from flying drones near the royal funeral areas based on a recent Civil Aviation Authority of Thailand (CAAT) announcement.

According to the announcement any private or unauthorised drones are banned from flying in a 19km radius of the royal cremation ground at Sanam Luang or flying near areas designated as places for mourners to lay funeral flowers.

Only those commissioned by the Royal Cremation Committee on Ceremonies for aerial photography will be permitted to take off. Others that violate this rule will be "destroyed", according to the announcement.

AVM Pongsak also said the RTAF appreciates cooperation by those who have supplied it with the information about unauthorised drone flying activities.

Information about unauthorised drone flying activities can be submitted to the RTAF's Facebook page or its LINE ID @rtaf, he said.

Meanwhile, the public will be allowed to place flowers in tribute to the late King before his portrait outside the Grand Palace until midnight Monday, according to the Royal Household Bureau. 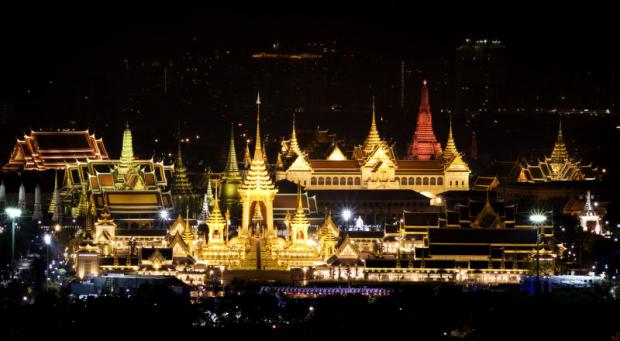 A night-time view of the complete royal crematorium for the late King Bhumibol Adulyadej at Sanam Luang with a scenic backdrop of the Grand Palace. (Photo by Sarot Meksophawannakul)

The offering of flowers will temporarily cease in preparation for the royal cremation ceremony which starts on Wednesday. After the ceremony, the public will be allowed to place flowers around the clock.

Speaking about measures to handle the large number of mourners who are likely to place sandalwood or cremation flowers on Thursday, acting deputy national police chief Wirachai Songmetta Sunday said police nationwide were ready to provide convenience for people who leave their hometowns to pay respects to the late King.

Pol Gen Wirachai was speaking during a police press briefing on the issue after a video conference with police spokesmen across the country.

He said all mourners must produce ID card to authorities. Otherwise, they will not be allowed to enter the royal cremation ceremony. Mourners are also required to dress in formal and respectful attire.

They should prepare food and water as well as carry details for a contact person in the event they pass out due to the large number of people and hot weather.

During the processions for the late King, mourners must put their umbrella down as well as take off their sunglasses and hats.

To screen all vehicles for security, drivers also must present a copy of their vehicle registration to authorities.

A shuttle bus will also be provided from skytrain and subway stations to the ceremony site.

Pol Gen Wirachai said the Royal Thai Police have also launched a mobile application, called Zon Tham Dee Pheu Pho, as a channel for the public to seek updates about routes to the ceremony site and other details about the ceremony such as the Phra Meru Mas (the royal crematorium).

The app is now available for both IOS and Android.

Meanwhile, His Majesty the King will attend a ceremony Monday at the King Rama V Equestrian Monument to mark Chulalongkorn Memorial Day at the Royal Plaza, according to the Royal Household Bureau.

His Majesty will then proceed to Amarin Winitchai Throne Hall at the Grand Palace to pay respects to the relics of King Chulalongkorn, who passed away on Oct 23, 1910.

A total of 57 monks will take part in the royal merit-making. 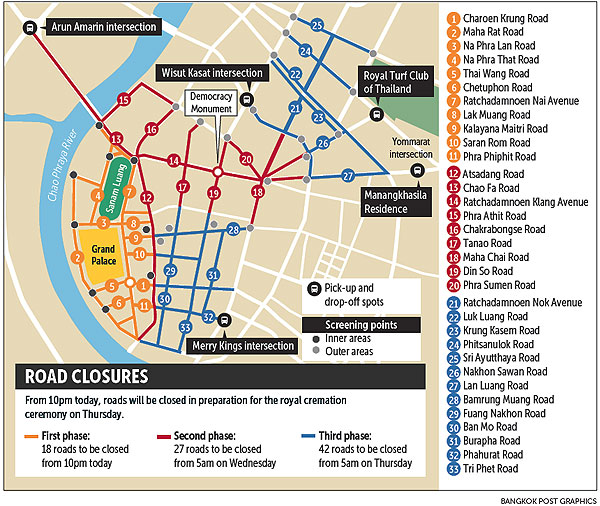