According to deputy national police chief Pol Gen Detnarong Suthichanbancha, the King has granted permission for mourners to observe the royal funeral processions from three sides of the Grand Palace.

The mourners can observe the royal funeral processions along Maha Rat Road to Sanam Chai Road, he said. He said the King has also allowed the area north of Sanam Luang and the area outside the royal ceremonial ground to be allocated for mourners. 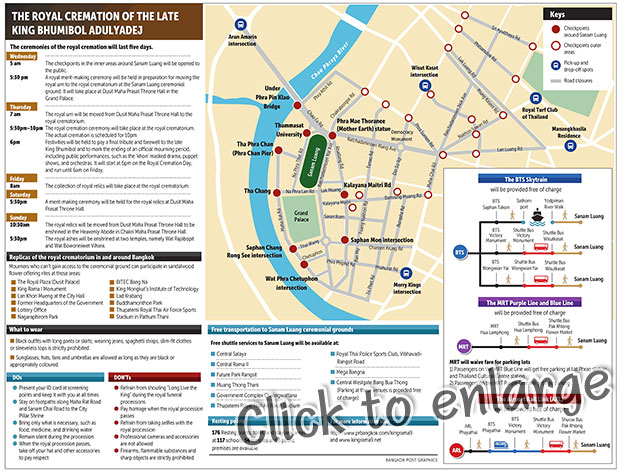 A total of 9,420 square metres will be added to accommodate 18,800 more people, he said, adding the areas previously allocated can accommodate about 171,000 people.

According to Pol Gen Detnarong, people will be asked to vacate the area by 10pm Tuesday to allow a special security team to carry out an inspection.

The public will be allowed to enter again at 5am on Wednesday, he added.

However, officers will allow those who wish to pay their respects to the picture of the late King beside the Grand Palace wall to do so around the clock, he said.

Meanwhile, mourners from the provinces have started arriving in Bangkok ahead of the ceremonies. Saman Raksawong, a senior rail official in Songkhla's Hat Yai, said two special trains provided for those who want to watch the royal cremation ceremony left the province Monday.

Extra train services into Bangkok were provided for Tuesday and will be available again Wednesday, Saturday, and Monday while additional Hat Yai-bound services are are being offered on Tuesday, Friday and Sunday, free of charge.