People camped overnight in the rain at the front of the Royal Hotel, one of the screening points for entry to watch the royal cremation ceremony at Sanam Luang. The screening points opened Wednesday at 5am. (Photo by Wichan Charoenkiatpakul)

His Majesty the King has requested measures be taken to ensure the public is safe and well cared for during the royal cremation ceremony for the late King Bhumibol Adulyadej tomorrow, taking into account weather conditions and other factors.

Army chief Chalermchai Sittisad said His Majesty King Maha Vajiralongkorn Bodindradebayavarangkun was concerned about mourners having to endure strong sunlight during the day that could be compounded by heat rising from the concrete pavements.

"We are considering laying rubber mats or mattresses on the ground to reduce the heat," Gen Chalermchai said Tuesday.

Crowds have been building around the royal cremation site at Sanam Luang in Bangkok's old quarter for days now as people began securing spots this week for an event that has been a year in the making.

The government has planned an elaborate farewell ceremony for the nation's revered monarch who reigned for 70 years and 126 days.

The ceremonies run from today until Sunday with the cremation due to take place tomorrow at 10pm.

The King has instructed the authorities to treat mourners with consideration, kindness and understanding, Gen Chalermchai said.

"His Majesty the King is concerned about the people. He instructed officials to treat them nicely, not to scold them and not to be too strict," he said.

Prime Minister Prayut Chan-o-cha has ordered officials to be flexible in dealing with those who come to see the royal funeral processions, said government spokesman Sansern Kaewkamnerd.

Rehearsals for the royal funeral processions on Friday and Saturday made the King realise extra care must be taken as the slow pace of proceedings could prove taxing for spectators, particularly the elderly, Lt Gen Sansern noted.

As such, umbrellas and hats will be permitted before the processions pass the area where the viewers are seated, he said.

They will be instructed to sit, be respectful and observe previously mapped out etiquette when the processions approach, he added.

Many people have already reserved pavement space in the vicinity of the royal cremation site at Sanam Luang and have been camping there since Monday.

Raincoats were in abundance  due to the heavy rain.

Roads around Sanam Luang, especially near the Rattanakosin Hotel, also known as Royal Hotel, Klong Lot canal and Chang Rong Si Bridge were proving popular spots as mourners waited for security checkpoints to open at 5am today to get as close as possible to the event.

Some turned up with plastic sheeting, food, cough syrup and drinking water. In a spirit of giving, local householders let them use their shower rooms and toilets.

But as the crowds flocked to the viewing areas, some chaotic scenes unfolded.

He said he had been first in line to enter the screening checkpoint near the Rattanakosin Hotel before he was squeezed out by queue-jumpers. 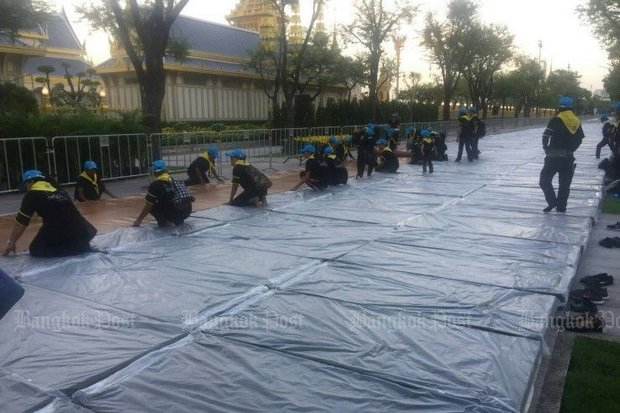 Above and below: His Majesty the King on Tuesday urged the government to provide better comfort from sun and rain at the Sanam Luang spectator areas. Within hours, volunteers had found mats that had been stored, unused. (Post Today photo) 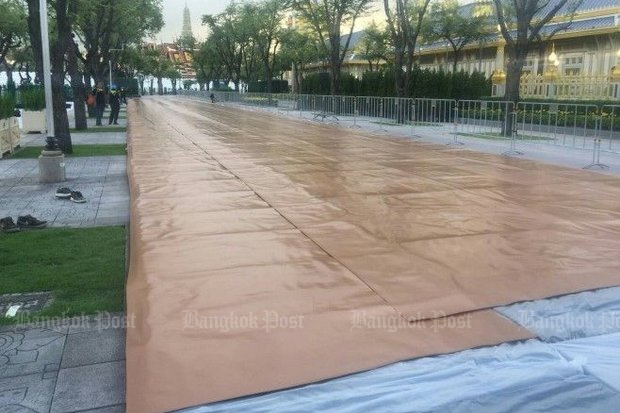 Volunteers were seen frantically trying to calm people down Tuesday as once-orderly lines became swollen and manners were forgotten. "Because there are so fewer authorities than citizens, it is becoming increasingly difficult to take care of people," said Thanamet Patchimapihong.

Twin sisters Atiporn and Onuma Chaisumrej decided a year ago to attend the royal cremation. They booked a hotel just 60m from Sanam Luang in March.

They joined the long queue on Monday night and took it in turns to save their places while the other one went to forage for food or shower.

After one day of waiting they made some new friends and even formed a small "support group", they joked.

Ms Atiporn said the situation was far from ideal but they were prepared to brave the inconvenience to say a final farewell to King Rama IX.

"All the inconvenience we've been through here, sleeping rough for four nights, is nothing compared to saying goodbye to our beloved king, which is a once-in-a-lifetime thing," said Ms Atiporn.

More police officers, volunteers and city officials were drafted in to maintain order this week as the number of people waiting grew in number.

Meanwhile, a commando unit under the Crime Suppression Division announced   it has anti-drone signal jammers ready to enforce a no-fly zone within a secured radius of 19km from the royal cremation site.

The POSTGraphics infographic below lists the main foreign dignitaries who will attend Thursday's cremation.