Mourners wait for screening in front of the Royal Hotel near Sanam Luang, Bangkok, on Wednesday morning. (Photo by Patipat Janthong)

Tens of thousands of mourners were passing through security screening on Wednesday at nine checkpoints around the venue for the royal cremation, as foreign dignitaries continued to arrive for the main ceremony on Thursday.

Many had been camped out on nearby pavements since Monday, braving rain, sun and heat, determined to secure a prime spot to view the cremation ceremony for their beloved late king, Rama IX.

At the checkpoints, authorities were checking ID cards and looking for weapons, professional cameras with zoom lenses and umbrellas and fans in colours other than black.

The government subsequently opened areas next to the walls of the Grand Palace on Maha Rat and Thai Wang roads, the road from the Territorial Defence Command to the City Pillar Shrine and footpaths on Sanam Luang.

Consequently the number of mourners at the ceremonial venues would rise from 50,000 to 110,000, Lt Gen Sansern said.

Deputy national police chief Detnarong Sutthichanbancha said that by 8am Wednesday 20,000 mourners had passed through checkpoints and 20,000 more were waiting.

According to the Foreign Ministry, high-level representatives of 42 other countries will attend the ceremonies.

People continue to arrive in Bangkok from the provinces to attend the royal cremation. Others were attending ceremonial activities on Wednesday and Thursday in their home provinces.

In Nakhon Si Thammarat province, residents gave alms to 159 Buddhist monks and novices in Muang district and about 1,000 people decorated a three-kilometre-long section of road with marigold flowers and put up billboards depicting the late king's works.

In Nakhon Phanom, workers were decorating the local replica of the royal crematorium with more than 30,000 blossoming marigold plants. On Thursday, mourners will lay sandalwood flowers at the crematorium as a measure of their love and respect for Rama IX. 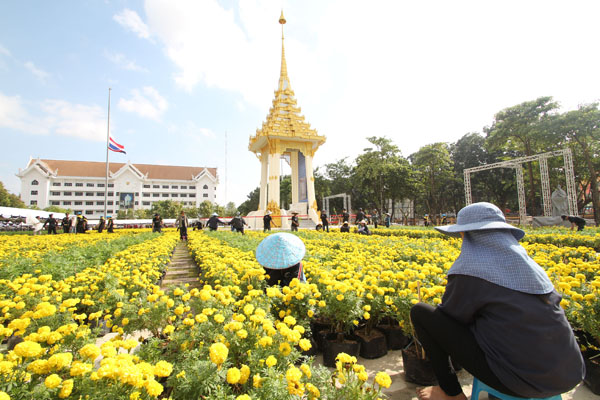 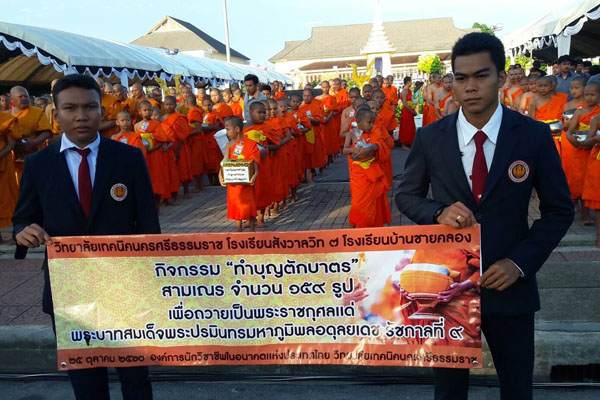 Buddhist monks and novices wait to receive alms at a merit-making activity in Nakhon Si Thammarat province on Wednesday. (Photo by Nujaree Raekrun) 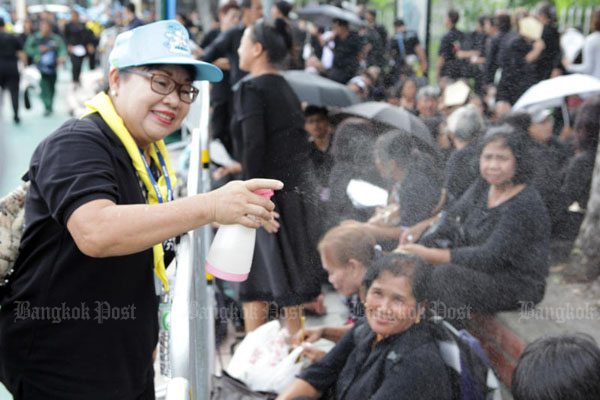 A volunteer sprays cooling water over mourners on Ratchadamnoen Avenue on Wednesday. (Photo by Tawatchai Kemgumnerd) 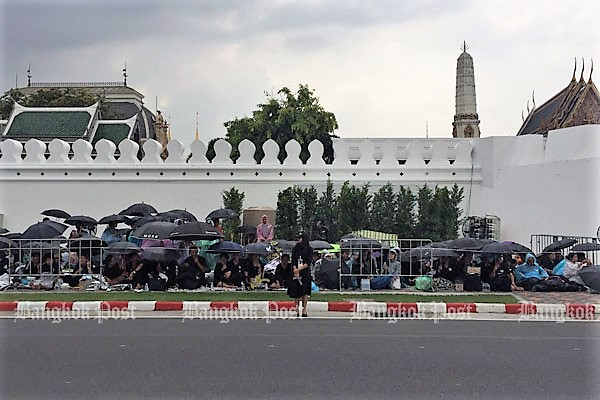 These mourners secured a  prime vantage point next to the wall of the Grand Palace, opposite the Saranrom Palace, on Wednesday. (Photo by Wassana Nanuam)