The coat of arms of the late King Bhumibol Adulyadej is moved from Stockholm Palace to the nearby Riddarholmen Church on Thursday. Chaiyot Yongcharoenchai

Asean countries joined Thais around the world in mourning the passing of the late King Bhumibol Adulyadej on the occasion of the royal cremation ceremony on Thursday.

For the past three days, the Asean Secretariat in Jakarta has flown the Asean flag at half-mast to show respect to the late King, the Ministry of Foreign Affairs said.

The Thai flag was also flown at half-mast at all Thai embassies, consulates and permanent representatives' offices in over 70 countries, the ministry said.

Additionally, sandalwood flower-laying ceremonies were held at Thai embassies and consular offices around the world.

Such ceremonies were also held by Thais and other organisations, many at Thai Buddhist temples abroad.

Likewise, in London on Thursday, many Thais made their way through the rain to lay flowers at Wat Buddhapadipa, in Wimbledon.

Some of them queued for over three hours to pay their final respects. 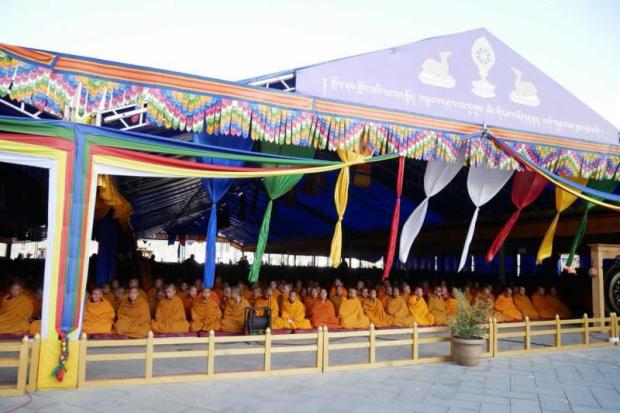 Special prayers are said on Thursday night at Buddha Dordenma at Kuenselphodrang in Thimphu, Bhutan to coincide with the royal cremation ceremony of the late King Bhumibol Adulyadej.

In Germany, ceremonies were held at Wat Buddhavihara, Berlin, and the Marienplatz, central square in the city centre of Munich.

In Singapore, hundreds of Thais flocked to the busy Orchard Road and lined up to lay flowers and pay their respects to the late, revered King.

Over 1,000 people on Thursday (Thailand time) gathered for a candlelit ceremony in front of San Francisco City Hall. Thais living in the city had earlier in the month donated sandalwood flowers which they sent to Bangkok for use in the royal ceremony in Bangkok as a token of their support.

A ceremony was held in Stockholm, Sweden on Thursday for the late King, who the country had made a Knight of the Swedish Royal Order of the Seraphim on April 5, 1950.

In Bangkok on Thursday, royals and distinguished guests representing 42 countries attended the ceremony at Sanam Luang.

While the Bhutanese king and his family were in Bangkok, the Facebook page of "His Majesty King Jigme Khesar Namgyel Wangchuck" broadcast the Bhutan king's attendance at the royal ceremony, as well as a special ceremony held in Bhutan, live for over three hours, and posted:

"The relations between Thailand and Bhutan remain stronger than ever today, with numerous Bhutanese travelling to Thailand for studies, work, medical treatment, business, and holidays, and an increasing number of reciprocal visits from Thai nationals.

"Among the many areas of co-operation between Bhutan and Thailand, the Queen's Project has been receiving wholehearted support from the Royal Projects of Thailand geared towards empowering local economies through strengthening cottage enterprises, for similar projects in Bhutan."

A 45-year-old hotel businessman working in Bhutan shared with the Bangkok Post his thoughts after attending the ceremony dedicated to the late King in Bhutan.

The ceremony took place at the same time as the royal cremation ceremony in Thailand.

"It was a rare occasion to have so many royal members attending an event like this. As soon as I walked into the venue I was stunned by a feeling of magic and sanctuary," he said.

"When the chanting started, I couldn't understand the language but the cool temperature and the sorrowful ambience struck me deep in my bones and grief brought tears to my eyes. In my head I was thinking this is not real, our father has left us.

"But when I opened my eyes, I had to face the reality that surrounded me."