Floodwaters to recede within a week
Thailand
General

Floodwaters to recede within a week

A local resident travels by boat in Sapphaya district of in Nakhon Sawan where floodwater from the Chao Phraya River has remained for a month and gives off a strong smell. (Photo by Chudate Seehawong)

Flooding persists in 17 provinces, mostly in the Central Plains, but the water will start to recede within a week, according to authorities.

Chayapol Thitisak, director-general of the Department of Disaster Prevention and Mitigation, said on Saturday that floodwater in the 17 provinces was affecting about 296,000 people in 2,409 villages and 20 families had to be evacuated.

Government spokesman Sansern Kaewkamnerd said water inflows from the North were easing in Nakhon Sawan, adding that the government would not increase discharges from the Chao Phraya dam on the Chao Phraya River flowing into Bangkok.

"Water from the Chao Phraya dam has reached Pathum Thani, Nonthaburi and Bangkok but is not causing any severe flooding," he said.

The Chao Phraya was flowing at a rate of 2,826 cubic metres per second in Bang Sai district of Ayutthaya while the section flowing through Bangkok and adjacent provinces could handle up to 3,500 cu/m per second, Lt Gen Sansern said.

He added that pumps were being deployed to speed drainage in flooded provinces, while the government was distributing consumer products and would offer financial compensation to flood victims.

Somkiat Prajamwong, director-general of the Royal Irrigation Department, said flooding in the Central Plains had already peaked and would start to decline in seven days.

In the northeastern province of Khon Kaen the Nam Phong River was overflowing and flooding wider areas in Nam Phong and Muang districts. Officials were reducing the discharge from the Ubonrat dam upstream but the impact was yet to be seen in downstream areas.

The Department of Disaster Prevention and Mitigation reported that from Oct 10 to 28, flooding had affected about 325,000 people in 23 provinces and killed 10. 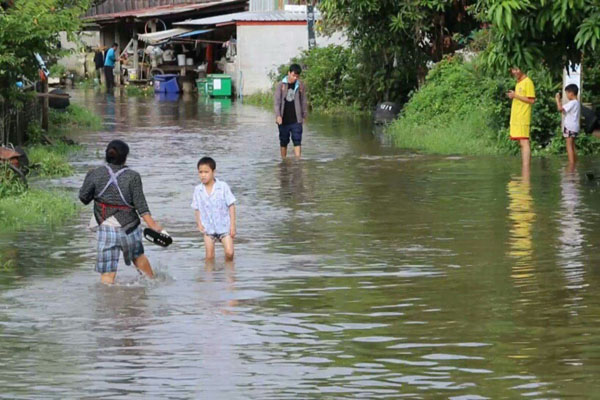