The Metropolitan Police Bureau is to implement a traffic management plan ahead of the arrival of Bodyslam band frontman Artiwara "Toon" Kongmalai as his charity run passes through Bangkok on Sunday. 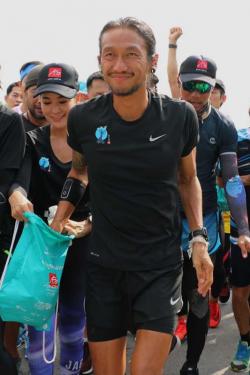 Jirapat Phumjit, the bureau deputy chief supervising the measures, on Friday said Artiwara was scheduled to reach a PT fuel service station on Boromratchonnanee Road in Thawi Watthana district at around 3pm tomorrow.

At around 8pm he will check-in at the Pullman Bangkok King Power Hotel in Soi Rang Nam near the monument.

Pol Maj Gen Jirapat said one lane of the roads he passes along will be closed while some areas around the monument will be sealed off due to the large number of well wishers expected.

The singer will then depart Bangkok on Tuesday at 3.30am. He will leave the hotel and run along Phaya Thai Road and Sri Ayutthaya Road and pass Nang Leang Racecourse, Wat Benchamabophit, the King Rama V equestrian statue at the Royal Plaza in Dusit district and Ratchadamnoen Nok and Klang avenues.

He will then cross Somdet Phra Pin Klao Bridge to enter Arun Amarin Road and head past Siriraj Hospital as he begins the next stage to Nonthaburi province.

Traffic police and relevant authorities will be stationed to provide assistance, he said.

The rock star started his 2,191km charity run from Yala in the deep South to Chiang Rai in the North on Nov 1 to try to raise 700 million baht for 11 state-run hospitals across the country.