Tycoon must report to cops Wednesday

Photo shows construction tycoon and accused leopard poacher Premchai Karnasuta after his arrest by wildlife officers last month. Police have ordered him to report Wenesday for questioning by the Counter-Corruption Division. (File photo)

Police have insisted construction tycoon Premchai Karnasuta must report in to officers to acknowledge the bribery charge against him Wednesday.

They rejected speculation about a delay amid criticism that investigators are dragging their feet in handling the president of Italian-Thai Development Plc's alleged poaching in Thungyai Naresuan wildlife sanctuary in Kanchanaburi last month.

Mr Premchai must report to the officers Wednesday because "investigators are not free" on other days, Counter-Corruption Division chief Kamol Rianracha said.

The Counter-Corruption Division chief said Mr Premchai's lawyer, who earlier asked for a rescheduling of the appointment without giving a reason, confirmed his client would show up Wednesday. Pol Maj Gen Kamol said he expected officers to finish questioning Thungyai Naresuan sanctuary chief Wichian Chinnawong and a second key witness about alleged bribery stemming from the poaching arrest Tuesday.

Mr Wichian, who led the detention of Mr Premchai and his three companions on Feb 4, accused the 63-year-old suspect of trying to bribe officials while being temporarily held by the arrest team. 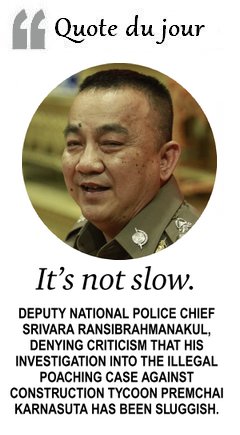 According to investigators, Mr Premchai allegedly said he would "give anything you want" to officials if they released him. Mr Premchai and his associates have been hit with nine charges related to alleged poaching in the world heritage site.

Mr Wichian's team found the suspects camped in a prohibited area and many wildlife carcasses along with a black Indochinese leopard pelt were found there.

However, environmental groups and university students have raised questions over why the group has not been charged with illegal hunting.

Deputy national police Srivara Ransibrahmanakul, who supervises the case, said Monday there is insufficient evidence to say whether the group did the hunting. He was talking to a group of Ramkhamhaeng University students who sought clarification from him at his office.

"We've never adopted double standards in handling his [Mr Premchai's] case. The rich and the poor must be treated equally under the law," Pol Gen Srivara said.

Fears of a conflict between police and the Department of National Park, Wildlife and Plant Conservation, which is conducting its own probe, will not affect the inquiry, Natural Resources and Environment Minister Surasak Kanjanarat said.

"Everything is on the right track and we have solid evidence to determine who the culprits are," Gen Surasak said.