Rescue workers take the injured 58-year-old woman motorcyclist to hospital after a falling internet cable sent her crashing to the road in Lampang on Wednesday. (Photo by Aswin Wongnorkaew)

LAMPANG: A woman motorcyclist was badly hurt when an overhead internet cable fell and wrapped around the front of her bike, sending her crashing to the road surface in Muang district.

It was the second such incident in a week, following a fatal accident in Khon Khan on April 25.

Wanida Jai-ngern, 58, was left lying face down on the road with severe facial injuries after the incident at Kok Chum village in tambon Phrabat, Muang district around 8pm on Tuesday, police said.

Rescue workers gave her first aid and took her to Lampang Hospital.

Witnesses told police that workers had earlier that day strung an internet cable across the road, attaching it to a power pole on each side.  It later fell to the road and wrapped around the basket on the front of the victim's bike as she was passing below it. The motorcycle came to a violent stop, hurling her to the ground.

People nearby rushed to help and alerted police. Many loudly blamed the workers who put up the cable, accusing them of being reckless and causing the accident.  They said it was fortunate it did not wrap around Ms Wanida's neck, as happened in Khon Kaen, where a woman motorcyclist was killed when an overhead cable wrapped around her neck on April 25.

Police summonsed the workers for questioning and to sign a police statement, to cover damage caused to the injured victim. 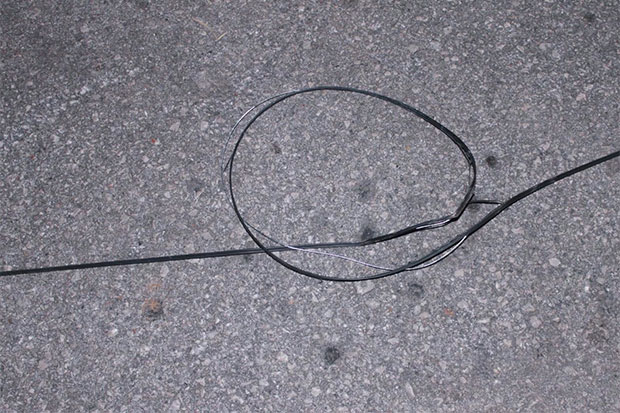 The fallen internet cable on the road in Muang district, Lampang, that caused injuries to a woman motorcyclist on Tuesday.  (Photo by Aswin Wongnorkaew) 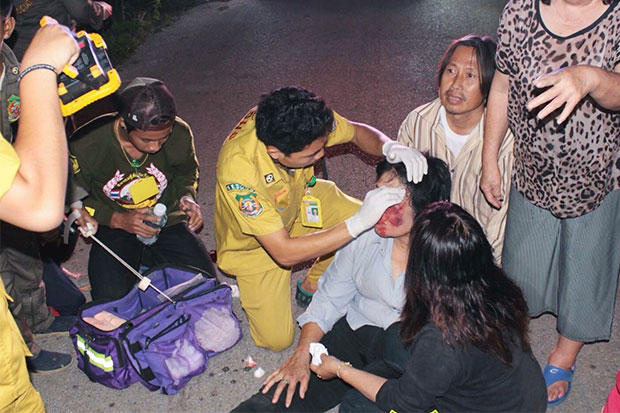 Crowd control police on Monday night arrested 36 members of the Chana Rakthin Network who rallied in front of Government House in protest against the government's planned industrial estate development in Songkhla's Chana district.