A large and sometimes noisy meeting of teachers (inset) submitted stronger demands for loan relief at the government's help centres, but Minister of Education Teerakiat Jareonsettasin (above) and the prime minister have shown little sympathy for the 'self-inflicted' debt problems. (Main photo by Apichart Jinakul)

Teachers who are threatening to stop repaying their loans in protest at high interest rates have found little sympathy from the government, which has warned they risk being declared bankrupt and dismissed from service.

Education Minister Teerakiat Jareonsettasin said Tuesday the move was being led by one group and most teachers would likely not support the idea.

Leaders of a network of professional teachers' organisations met in Maha Sarakham in Isan on Saturday and said their 450,000 members planned to stop paying off their debts to the state-owned Government Savings Bank (GSB) starting from next month.

Dr Teerakiat said the move would not affect an agreement reached with the GSB in May to solve teachers' debt problems. The deal took effect in June and most teachers were satisfied with the solutions reached, he claimed.

He was referring to the GSB's loan programme for members of teachers' funeral funds.

The loans allow teachers to repay debts to other financial institutions or informal creditors, buy houses, vehicles or shares, start a business, or pay for other key transactions.

The borrowers under the programme currently owe more than 418 billion baht. 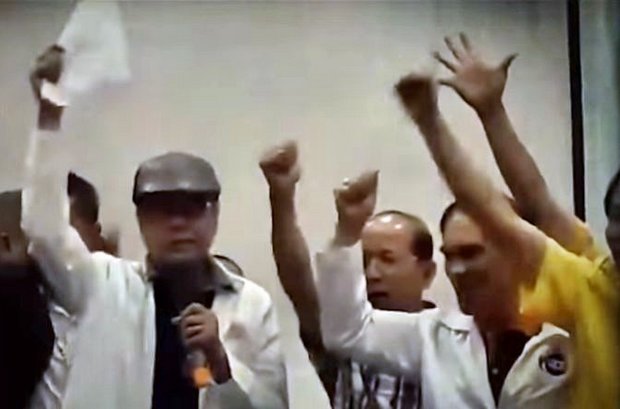 A group of teachers met on Monday to demand action by the government to help them with debt relief. (Photo via Facebook)

Many debtors have failed to pay more than three consecutive instalments, prompting the Education Ministry to sign the agreement with the GSB on May 7 to resolve the issue.

The deal amended some of the conditions attached. Instead of the GSB giving financial support to the Office of the Welfare Promotion Commission for Teachers and Educational Personnel, the bank has effectively reduced the interest rates by offering a refund of 0.5-1% to "good" debtors, who make up 90% of the total, from last month.

Deputy permanent secretary for justice Tawatchai Thaikyo warned  that those teachers who plan to default risk bankruptcy and disqualification from government service.

"Be prepared to go bankrupt if you owe more than 1 million baht," he said.

"If teachers and other educational personnel are declared by a court to be bankrupt, they will be disqualified from government service," Mr Tawatchai said.

The latter could also cause their guarantors to become bankrupt, which would see them prohibited from ventured overseas, Mr Tawatchai said.

Ouaychai Wata, head of the professional teachers network, said after the meeting that the GSB was raising interest rates to astronomical levels.

Moreover, borrowers were being forced to buy life insurance from the bank, he added.

Each debtor was allowed to borrow up to 3 million baht, with their repayments spread over a maximum of 30 years.

The teachers' network demanded the government approve a six-month moratorium on repayments starting Oct 1, to be followed by an interest rate cut to just 1%. Teachers now pay interest rates of between 5-7% on loans.

Mr Ouaychai said the declaration was a symbolic gesture by teachers who have collectively taken out over 300 billion baht in loans from the bank.

He said it was unfair to blame their indebtedness on an inability to service their debts and pointed the finger at the way the interest was calculated.

For the last seven years he paid monthly instalments in excess of 7,000 baht to repay a 1.2-million-baht loan, he said.

Video footage of the group demanding a moratorium on their debt repayments that was released went viral and drew much criticism on social media on Monday.

Many said it was inappropriate for teachers, who are regarded as role models for the nation's youth, to resort to such action.

"When you owe someone a debt, you have to repay it. How can you think of defaulting yet still call yourselves role models for the country?" read one comment posted by a netizen on Mr Ouaychai's Facebook page.

Prime Minister Prayut Chan-o-cha said the Education Ministry has discussed the issue with the GSB, which agreed to lower the rates.

"Most teachers are repaying their debts well and disagree with the move to default," he said.

"Do not let the issue get out of hand," he implored. "All parties must show understanding."