A member of the Philippine Air Force stands in front of a satellite image of Typhoon Mangkhut at the National Disaster Risk Reduction and Management Council operations center in metropolitan Manila. Philippine officials have begun evacuating thousands from the direct path of the most powerful typhoon this year, closing schools and readying bulldozers for landslides. (AP photo)

HONG KONG: The Philippines braced early Friday for the onslaught of Super-Typhoon Mangkhut, whose 240kph (150 mph) winds were on a path for a direct hit at the country's largest and most populous island.

The military and police in northern Luzon were placed on red alert - barring all troops from going on leave - so they could respond to emergencies in communities expected to bear the brunt of the typhoon, which packed the wind power of a Category 5 hurricane.

A livestream update of the progress of Super Typhoon Mangkhut is available here. (Link goes to YouTube page of Space Videos).

The typhoon appeared likely to strike an area considered the breadbasket of the Philippines, raising fears of significant damage to the agricultural sector, which has already been reeling from a series of typhoons that destroyed crops, livestock and fisheries.

The storm could bring "ruinous rain to central Luzon, home to the country's agricultural land," warned Richard Gordon, a senator and the chairman of the Philippine Red Cross. The typhoon is coming at the start of the corn and rice harvest, and farmers were urged to bring in as much of their crops as they could to minimize the damage.

Officials warned that Super Typhoon Mangkhut carried the intensity of Super Typhoon Haiyan in 2013, which killed more than 6,000 people, most of them in a storm surge. But as of Thursday, Mangkhut was on track to hit less densely populated areas.

President Rodrigo "The Punisher" Duterte summoned his cabinet to an emergency session Thursday afternoon to plot strategy for dealing with the incoming storm, which is called Ompong in the Philippines. Officials said 4 million people will likely be exposed to the storm's most damaging effects.

Current forecasts show the typhoon on a track to start lashing the Philippines with strong winds and heavy rains Friday, with the eye passing over northern Luzon Saturday, drenching areas as far south on the island as Manila, the capital.

It was then on track to hit northern Vietnam, densely populated Guangdong province in China and possibly Hong Kong. That teeming area of megacities is home to more than 100 million people and is seen as particularly vulnerable to the effects of climate change, though cities like Hong Kong are well prepared for even powerful typhoons.

That is when the typhoon's wide area will begin lashing Thailand with high winds and heavy rain, starting in the Northeast. 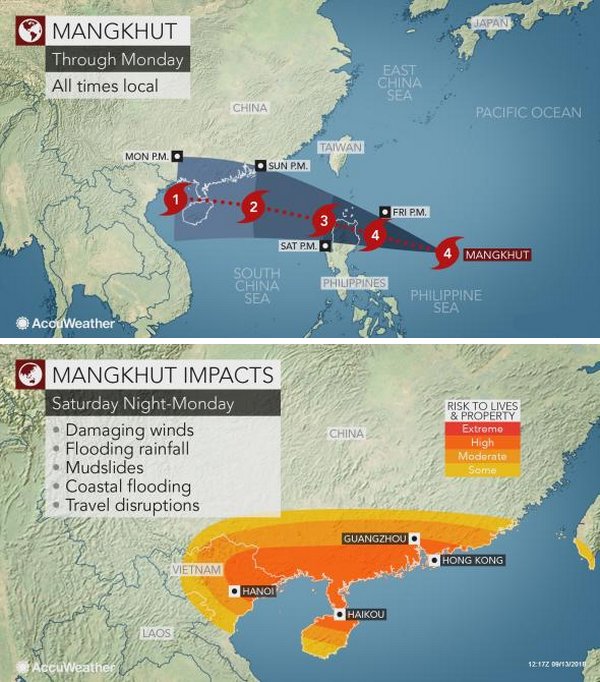 In Taiwan, officials were relieved by the typhoon's slight turn southward. That seemed likely to spare the island, which previous projections had put in the path of the storm.

In the Philippine province of Cagayan in northern Luzon, the governor, Manuel Mamba, ordered evacuations and closed schools and offices as precautionary measures. He told The Associated Press that this typhoon "is very different, this is more complicated because of possible storm surges."

The danger underlined how vulnerable the Philippines has become to climate disruptions because of its location at the crossroads of the Pacific, making it subject to increasingly frequent and powerful typhoons.

Edgar Posadas, a spokesman of the Office of Civil Defence, urged Filipinos to prepare for the worst.

"We have people in those areas who say that as of now it remains sunny - but let us not be complacent," he said, recalling how before Haiyan "it was sunny, but the following day it was a deluge."

He said Mangkhut (a name derived from the Thai fruit), was "bigger in terms of coverage" geographically than Haiyan, threatening some 29 provinces and 30 cities in its path. Its rain band was 900 kilometres wide, 50% bigger than Haiyan's.

Gordon, the head of the Philippine Red Cross, said emergency response teams; search and rescue teams; water, sanitation and health units; and volunteers were on standby in northern and central Luzon, as well as in Manila, awaiting the storm.

"We're worried for the 10 million people in the Philippines living in the path of this destructive storm, including those who have been displaced several times due to monsoon rains last July and August," he said.