Forensic police on Thursday match the damage to the dead man's bicycle and the van at Saen Phudas police station in Ban Pho district, Chachoengsao province. (Photo by Sonthanaporn Inchan)

Police are going after a man believed to have been behind the wheel of a van that hit and killed a cyclist from the Philippines taking part in a long-distance ride in Thailand.

Niphon Klaising, chief of the Saen Phudas station, said on Thursday the driver was 29 years old. The Chachoengsao Court had approved an arrest warrant for him.

Pol Col Niphon did not name the man but Thairath Online identified him as Chutiphan Buddawieng, who lives in Aranyaprathet district in Sa Kaeo province.

The warrant was based on evidence gathered at the crash scene and CCTV footage from cameras along the roads to and from the intersection, Pol Col Niphon said.

The crash scene is under the jurisdiction of Saen Phudas police.

Russel Perez was killed by a van than ran a red light in Ban Pho district of Chachoengsao province in the early hours of Tuesday. The driver sped off without stopping to help him.

Perez was taking part in the non-competitive 1000BRM long-distance rally organised by Audax Randonneurs Thailand. The riders left Suvarnabhumi airport on Saturday, heading to Trat, and had to return and cross the finish line at the airport on Tuesday. Perez was less than 50 kilometres from the line after pedalling almost 1,000 kilometres.  (continues below) 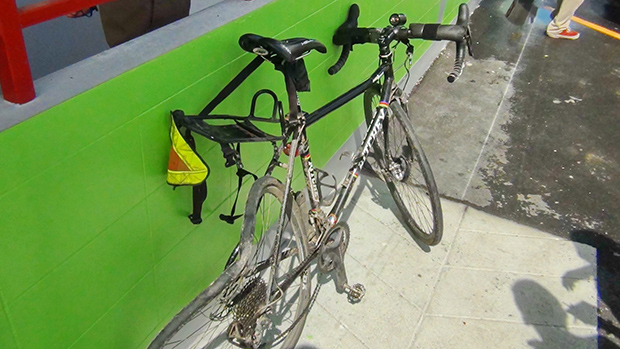 Pol Col Niphon said a damaged van, a white Toyota, was found at a garage in Min Buri district in Bangkok. It was taken to the Saen Phudas police station for forensic and fingerprint testing.

The police station chief said a man drove the van to the garage on Wednesday morning for repairs. He said the vehicle hit a cow.

Pol Col Niphon advised event organisers they should not allow night biking. It was too dangerous.

Pratheep Somboonpoonpipat, the chief of the tourism and sports provincial office, said the agency was collecting information on financial compensation and the cost of sending the dead cyclist's body back to the Philippines.