The Norwegian man's body hangs against the outside of the Northshore Condominium off Pattaya Beach Road in Chon Buri on Wednesday morning. (Photo by Chaiyot Pupattanapong)

PATTAYA: Police investigators have confirmed a Norwegian man found hanging from a highrise rooftop on Wednesday had committed suicide, after examining his medical record and will.

The man had cancer and received treatment at a hospital in Pattaya. He left a suicide letter and had made a will bequeathing his assets to his Thai wife.

The 69-year-old, wearing shorts and a transparent raincoat, was found hanging from the rooftop of the 31-storey Northshore Condominium on Soi 5 off Pattaya’s Beach Road in tambon Nong Prue of Bang Lamung district on Wednesday morning.

Police investigators said he put a nylon rope tied to a fire hydrant around his neck, sat on a rooftop corner and shot himself in the neck using a home-made gun triggered with the rope.

Statements made by hospital staff said the man went to the hospital 2-3 days before his death, and declared that in the event of his injured body being brought to the hospital, he did not want any treatment to prolong his life, the Pattaya police chief said.

His wife raised no doubts about his death, saying his actions prior to his death were as if he was bidding her farewell.

Investigators had thoroughly examined the scene of his death and found no traces of a struggle. Nobody else had been on the rooftop at the time.

They also found two heavy wooden chopping blocks, one with a metre-long steel pipe affixed to it and tethered to the rope.

The couple lived in a room on the 23rd floor of the condominium. 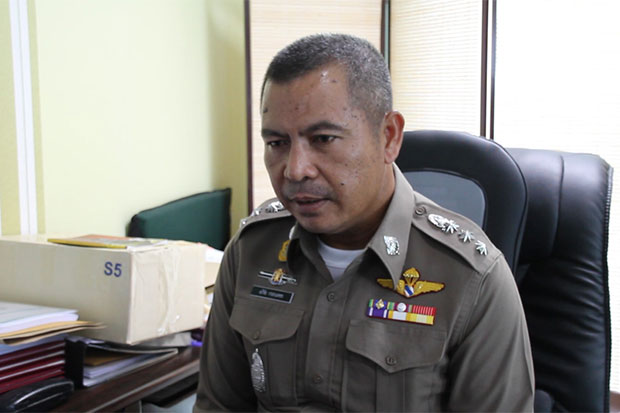 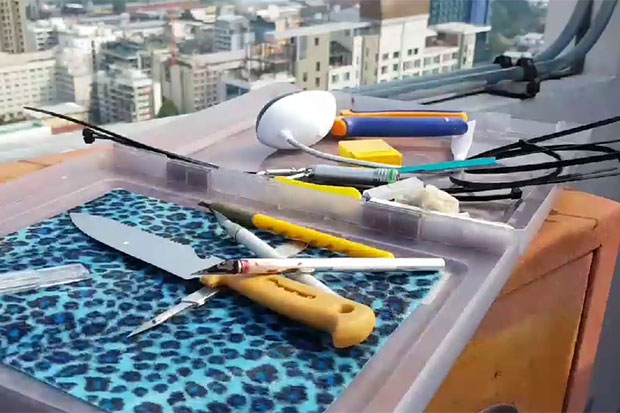 Some items found at the rooftop of the highrise condominium. (Photo by Chaiyot Pupattanapong)