Another large seizure of kratom leaves in far South

Sacks of kratom leaves are removed fro the back of the pickup truck abandoned at a rubber plantation in Saba Yai district, Songkhla, after a car chase. (Photo by Assawin Pakkawan)

SONGKHLA: Police seized 450 kilogrammes of kratom leaves found on a pickup truck abandoned by the driver after a 10 kilometre chase in Saba Yoi district on Thursday morning.

Village defence volunteers led by Thaweesak Songsrithong, head of Moo 2 village, gave chase to the Isuzu D-Max pickup after the driver refused to stop for a search at a checkpoint on the Suan Cham-Saba Yoi Road and sped off.

The driver later abandoned the pickup at a rubber plantation 10 kilometres away.

Many sacks and plastic bags stuffed with kratom leaves were found stacked inside the cab and in the bed of the truck, a member of the defence team said.

Police were called to the scene. The bags and the pickup truck were taken to Saba Yoi police station. When weighed, there were 450kg of leaves.

Police said the kratom was probably harvested near the Malaysian border and was intended for sale throughout border districts in this southern province.

Kratom leaves are frequently mixed into a cough-mixture cocktail called “4x100’’, which is popular with young people.

It was the second large seizure of the stimulant leaves in the province this week. On Tuesday, 500kg of kratom were seized after a short-lived car chase, and the driver did not get away. 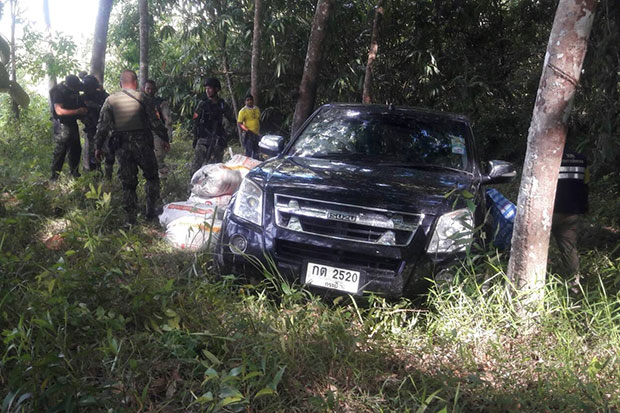 This pickup truck carrying sacks of kratom leaves was abandoned by the driver at a rubber plantation after a car chase on Thursday morning. (Photo by Assawin Pakkawan) 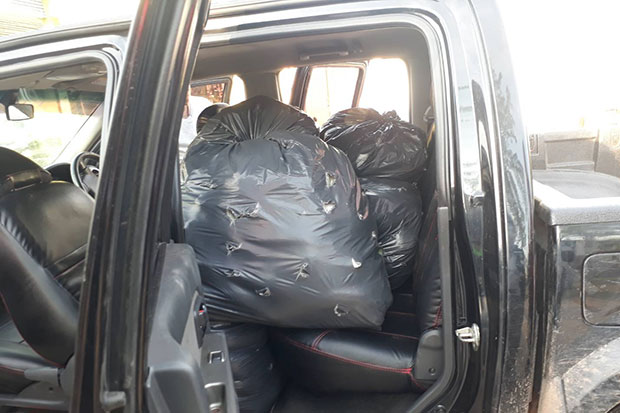 Plastic bags containing kratom leaves in the cab of the pickup. (Photo by Assawin Pakkawan)