Thailand revs up for Asean summit

A woman works on a computer at a media centre set up at the Grande Centre Point Hotel in Bangkok for the 34th Asean Summit to be held on Saturday and Sunday. (Photo by Pattarapong Chatpattarasill)

With the first Asean summit of the year around the corner, Thailand as the chair of the regional bloc plans to promote sustainability and partnership amid challenges in the current state of affairs.

Ministry of Foreign Affairs officials and some academics are optimistic about Thailand's role this time, and believe the hard work that the kingdom has done over the past two years is about to pay off and become a reality.

Piti Srisangnam, the director of academic affairs of the Asean Studies Centre at Chulalongkorn University, said Thailand is taking a different approach than the other rotating chairs of Asean.

While each country has in the past come up with new projects or ideas to highlight, Thailand is bringing those proposed projects and ideas to life.

Having prepared for over two years, the kingdom is now ready to open seven Asean centres.

Thailand has also further developed the concept of smart cities, which was the highlight of last year's chair, Singapore.

Moreover, Thailand is looking further into the future by assigning the Economic Research Institute for Asean and East Asia (ERIA) to complete a study that comes up with proposals for the topic Asean Vision 2040: Towards a Bolder and Stronger Asean Community.

In terms of the economy, Auramon Supthaweethum, director-general of the Trade Negotiations Department, said Regional Comprehensive Economic Partnership (RCEP) negotiations can be expected this year.

The Asean summit-related meetings kicks off with the meeting of the Committee of Permanent Representatives to Asean (CPR) today, and the Special Asean Economic Ministers' Meeting on RCEP.

The Asean leaders earlier agreed to push for the conclusion of the RCEP negotiations by the end of this year, she said. And even if an agreement cannot be reached, there are signs of progress in the talks.

Asst Prof Piti agreed the RCEP's prospective members have witnessed the impact of the US-China trade war and protectionism, and understand the potential of boosting trade within the regional group.

"We have seen good signs that India is back in the negotiation process," he said, adding that Indian premier Narendra Modi is a big supporter of free trade.

The theme of the Asean chairmanship this year is "Advancing Partnership for Sustainability".

The Department of Asean Affairs deputy director-general Usana Berananda said the 17 documents to be acknowledged or endorsed this time all share the central concept of sustainability. 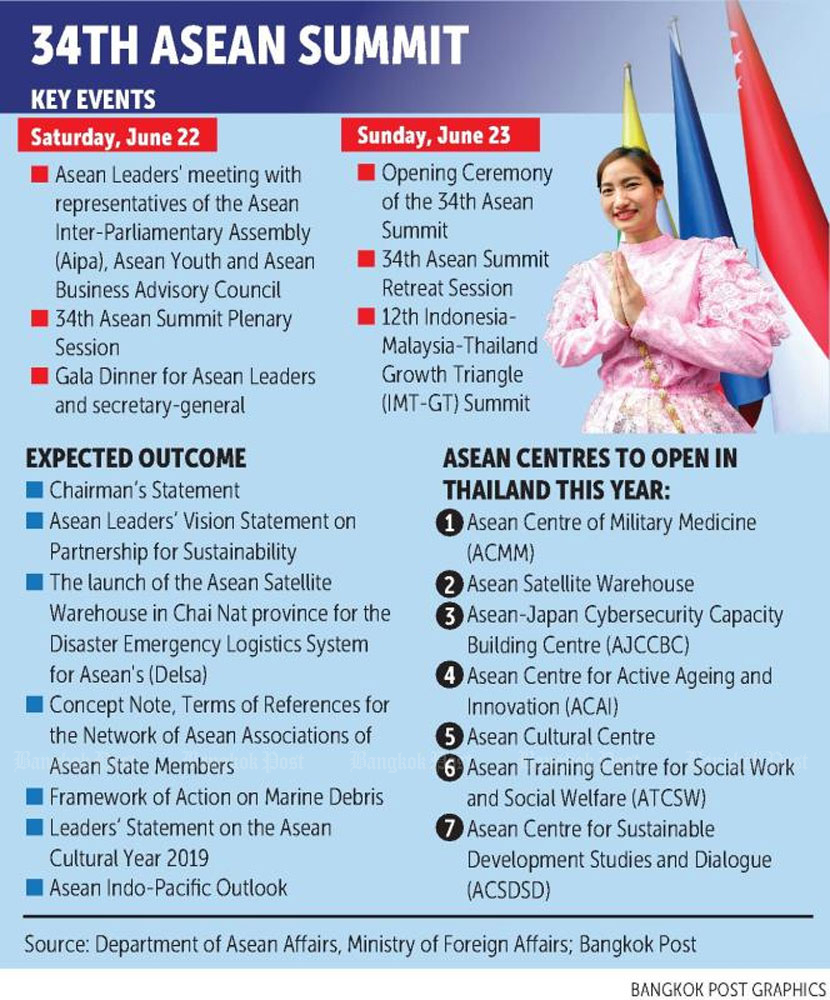 The 280 Asean summit-related meetings taking place in Thailand during the year will be "green meetings", which she is looking forward to because she will be able to see the difference that they make by the end of the year, before Thailand hands over the chairmanship to Vietnam.

Department of Asean Affairs director-general Suriya Chindawongse said that under the kingdom's leadership, there will be a focus on building a people-centred Asean community "that leaves no one behind and looks to the future".

Working towards a digital, green and seamlessly connected region will be at the centre of talks, as well as the promotion of Asean centrality within the context of the regional architecture, he added.

The expected outcome of the summit will be a declaration of the leaders' vision for sustainability along with an operational plan to resolve the problems of maritime pollution, as well as the drafting of a framework of ideas regarding the Indo-Pacific concept, Mr Suriya said.

The second Asean summit of this year will be held in November, with leaders of other nations invited to attend related meetings including the East Asia summit.

Chulalongkorn University political science professor Surachart Bamrungsuk said it is important for Asean to help solve issues such as the violence in Rakhine state of Myanmar and environmental problems, so that the Asean summit is not just a "social gathering" in the region.

Meanwhile, Professor Prapat Thepchatree, the director of the Centre for Asean Studies at Thammasat University, said these issues are sensitive and Thailand must be careful not to cause rifts within Asean.

"It is important to take Asean's tradition of non-interference and balance it with the responsibility to provide humanitarian assistance," he said about the Rakhine issue.

Looking at the good relations between Thailand and Myanmar and the military's role in Myanmar's administration, Asst Prof Piti suggested that instead of putting pressure on Myanmar, Asean should send humanitarian assistance to the refugees at Cox's Bazar in Bangladesh as evidence of Asean's willingness to help fix the problem.

Ms Usana said the Asean summit retreat session on Sunday will be a good chance for the leaders to open up and discuss issues of concern.

Prof Prapat said that in addition to digital development and connectivity, Asean centrality and unity will be very important for the group. He noted that the US and China power play will be another challenge as they try to divide and rule the regional bloc members, and that US President Donald Trump has clearly denied multilateralism, while China is very aggressive in pushing for the Belt and Road Initiative but mostly through bilateral negotiations.

“Pushing together the Asean vision on Indo-Pacific concepts and working towards the same goals will strengthen the region, especially amid the challenges of trade wars and global protectionism,” he said.

Prof Surachart said that to make Thailand’s chairmanship meaningful, it is important that it leads Asean countries into moving agreements and policies forward to solve current or prolonged issues.

“Even if the leaders cannot agree on big issues, they should be able to come up with clear measures to tackle issues including the environment, waste and wildfires,” Prof Surachart said.

Prof Surachart said it will be interesting to see how much Thailand is able to get done in its last six months as Asean chair, considering the status of the Thai government, which is still in between a military and an elected government, combined with the uncertainty about who will be the next foreign minister.

Asst Prof Piti expressed no concern about Thailand’s Asean chairmanship but said he believed that those in charge of security would not allow something like what happened at the Asean summit in Pattaya ten years ago to happen, when anti-government protesters stormed the summit meeting and forced leaders to abandon talks.