Prime Minister Prayut Chan-o-cha, sixth from left, and Asean foreign ministers link hands for a group photo at the opening of the 52nd Asean Foreign Ministers' Meeting in Bangkok on Wednesday. (Photo by Wichan Charoenkiatpakul)

Asean and China have completed the first reading of the Single Draft Negotiating Text of the Code of Conduct (CoC) for the South China Sea ahead of schedule, Chinese State Councillor and Foreign Minister Wang Yi announced on Wednesday.

Attending the Asean-China Ministerial Meeting in Bangkok, Mr Wang said Asean and China had finally concluded the long-awaited first reading of the document after they worked together to explore a rules-based approach to the governance of the South China Sea.

"We have streamlined the text and established a clearer architecture and elements of the CoC text. It represents new progress in the CoC consultation and marks a critical step towards the goal of completing it within three years' time," he said.

Mr Wang attributed the milestone in the CoC consultation to the efforts of the bloc's members.

"We can complete the first reading of the text ahead of time because other parties have had sincere consultations. The outcome must be cherished. This progress has given us more time for follow-up readings and strengthened our confidence and firm conviction to build rules for the region and peace in the South China Sea together," he said. 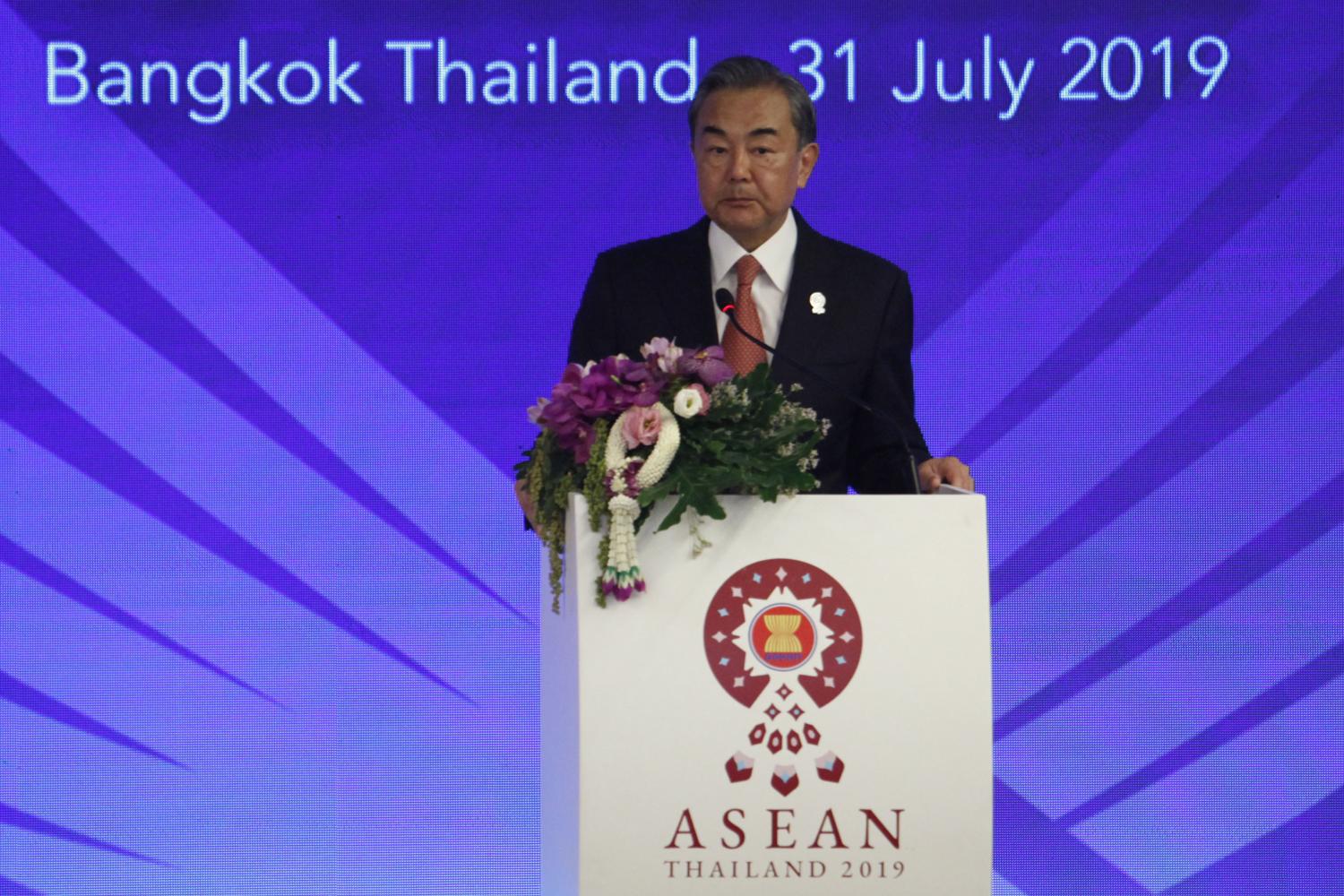 The Asean-China Ministerial Meeting was co-chaired by Mr Wang and Teodoro L Locsin, Jr, secretary of foreign affairs for the Philippines, one of the claimant states in the South China Sea dispute.

Brunei, China, Malaysia, the Philippines, Taiwan and Vietnam are involved in overlapping claims to the vast and resource-rich maritime area and waterway.

At recent meetings on the dispute, Asean countries expressed concerns about the rise of military activities, illegal and unregulated fishing, transnational crime, maritime pollution, depletion of marine resources, and the use of external force in the South China Sea.

Speaking on cooperation and development of relations in general, Mr Locsin, however, lauded the bloc's long-standing alliance with China. "The Asean dialogue with China is the most important and should be the most dynamic and substantive in the region. Since the commencement of our dialogue in 1991, our engagement has deepened and expanded in many areas of cooperation," he said.

Meanwhile, Mr Wang touted the growth of Asean-China trade. "Last year, China's financial investment in Asean is close to US$10 billion, making the bloc our second largest destination for investment for the first time," he said.

With China's focus on Belt and Road development, Mr Wang affirmed its commitment to enhancing regional connectivity as China has signed bilateral documents on Belt and Road cooperations with all Asean countries.

Opening the the 52nd Asean Foreign Ministers' Meeting, Prime Minister Prayut Chan-o-cha on Wednesday pledged that Asean, under Thailand's chairmanship, will forge closer ties with partners to fulfill the bloc's vision of sustainability.

Gen Prayut said the bloc will work more closely with non-Asean countries to achieve the goal of sustainability through Asean-led platforms, including the Asean Plus Three, the Asean Regional Forum, and the East Asia Summit. "We have invited our partners to join the Asean Smart Cities Network in August. We are looking to increase connectivity in transport, people, digital infrastructure, and commerce. Most importantly, we will conclude the Regional Comprehensive Economic Partnership this year. "We will promote regional security in accordance with the principle of mutual trust, respect, and benefit to resolve conflicts peacefully," he said.

Gen Prayut underscored the bloc's effort to forge alliances with non-Asean countries and working on such issues as gender equality, tackling issues of marine pollution and climate change and develop human capital."

Meanwhile, Foreign Minister Don Pramudwinai urged Asean to be more forward-looking and united in the face of challenges.

"Our leader convened here in Bangkok for the 34th Asean Summit last month. Among their concerns are geopolitical, economic, and social changes," he said.

He said the bloc agreed unanimously to strengthen partnership and turn conflicts into cooperation while upholding the Asean principle of non-interference.