A portrait of missing Karen activist Porlajee “Billy” Rakchongcharoen is displayed at an event held in Kaeng Krachan district, Phetchaburi province, in 2017. The Department of Special Investigation said on Tuesday he was murdered. (File photo by Patipat Janthong)

The Department of Special Investigation (DSI) said on Tuesday that missing Karen rights activist Porlajee "Billy" Rakchongcharoen had been killed as a piece of his burnt skull was found in the reservoir of the Kaeng Krachan dam in Phetchaburi province.

DSI executives announced their investigative findings about the disappearance of Porlajee, 30, in April 2014. He had earlier led a fight against eviction from the Kaeng Krachan National Park and helped relatives sue officials for the destruction of Karen people's houses there.

DSI deputy director-general Korawat Panpraphakorn said DSI detectives and officials from other organisations had joined the investigation to find evidence related to the disappearance.

On April 26 and May 22-24, a sonar-equipped underwater drone of King Mongkut's University of Technology North Bangkok was operated together with divers from the Border Patrol Police to comb through specific locations at the bottom of the dam under a suspension bridge.

Found there were a oil barrel, its lid, two steel rods, a burnt wooden piece, and two bones. The Central Institute of Forensic Science found one of the bones was a piece of a human skull. It was burnt, cracked and shrank due to heat at 200-300 degrees Celsius.

The thumb-sized bone — the peruous part of the temporal bone — found at the bottom of the barrel was a crucial piece as it indicated the owner's death. As the genetic trace of the bone matched that of Porlajee's mother, the DSI concluded it was part of Porlajee, Pol Lt Col Korawat said.

The DSI did not know the cause of death but was convinced the body was burnt to conceal the crime, he said.

Divers re-examined the scene on Aug 28-30 and found 20 more bones, eight of which were of human. Investigation into the bones and suspects were underway, he said.

The DSI concluded that the crime was a torture murder and was identifying suspects, he said.

Porlajee was last seen on April 17, 2014 in the custody of state officials.

At the time of his arrest, he was helping his relatives, a group of ethnic Karen, to sue Chaiwat Limlikit-aksorn, the former chief of Kaeng Krachan National Park, for setting fire to their bamboo huts and rice barns during a series of forest evictions.

Mr Chaiwat later claimed Porlajee was arrested for collecting wild honey, but was released after being given a warning.

Mr Chaiwat and his team faced a murder charge related to Porlajee's disappearance but were eventually acquitted due to a lack of evidence. 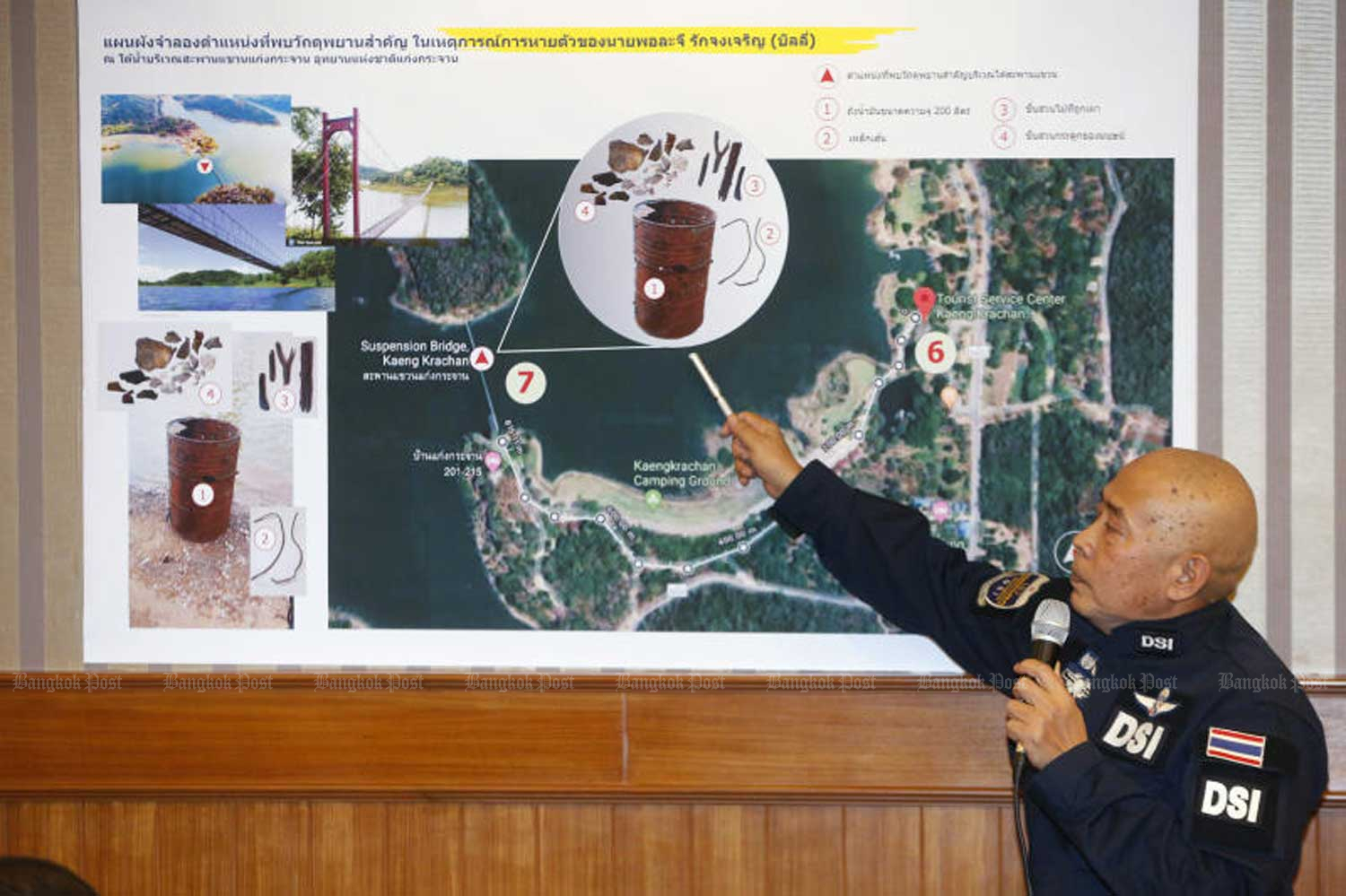 DSI deputy director Korawat Panpraphakorn points at the picture of the oil barrel found under a suspension bridge at the reservoir of the Kaeng Krachan dam in the Kaeng Krachan National Park in Phetchaburi at the Department of Special Investigation in Bangkok on Tuesday. (Photo by Pornprom Satrabhaya) 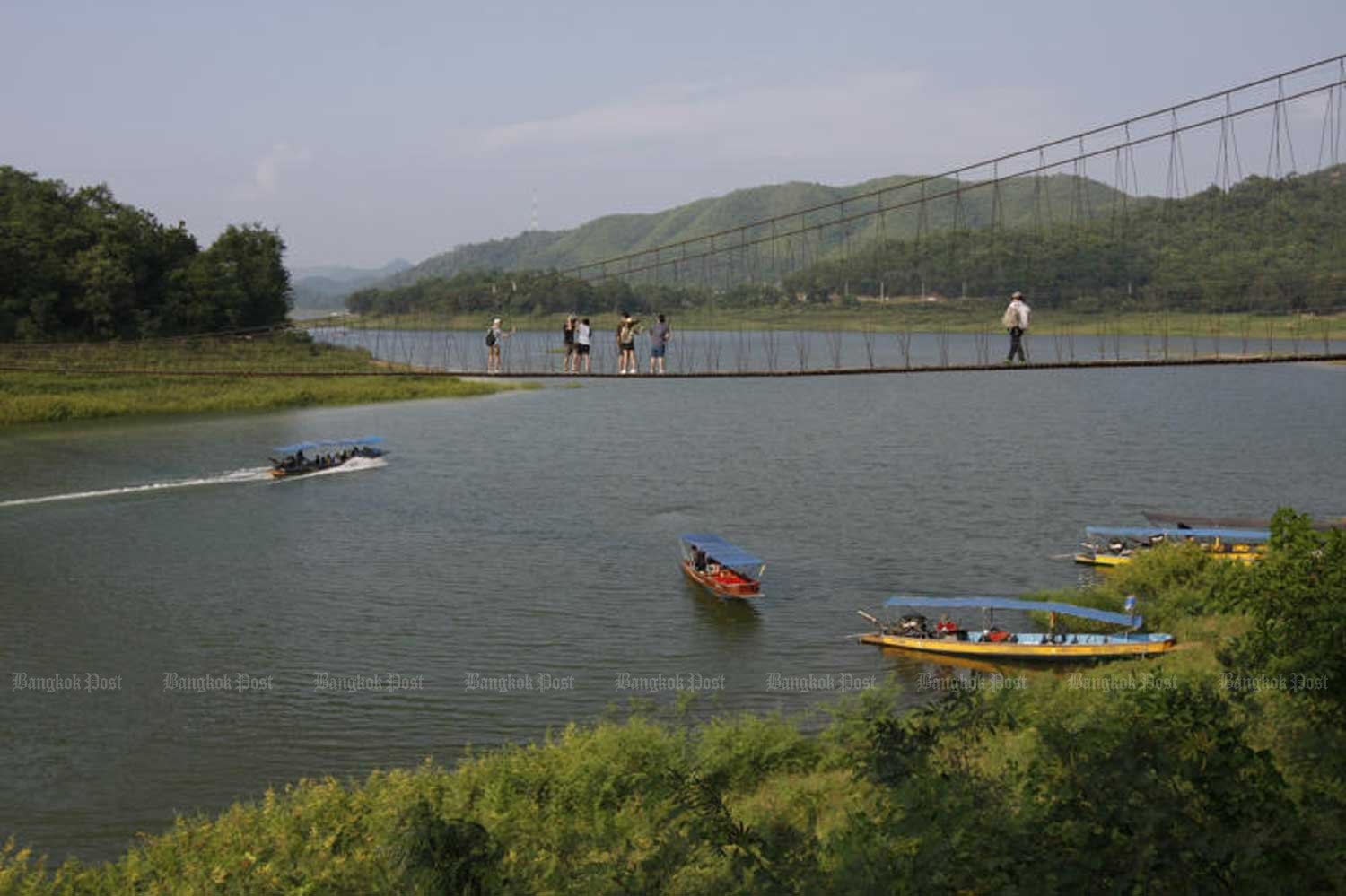