Sakchai Suphanthamat, 40, of Udon Thani, pushes his two-wheel cart with an urn containing the cremated ashes and bones of his wife, as he and his three dogs travel through Prachin Buri province on Saturday. (Photo by Manit Sanubboon)

PRACHIN BURI: A 40-year-old northeastern man is continuing the journey he started three years ago, when he set out on foot from Trang to take his beloved wife's remains to visit the places she had always wanted to see, but never had the opportunity.

Sakchai Suphanthamat was spotted pushing his two-wheel cart, in company with his three dogs, along Highway 304 (Kabin Buri-Nakhon Ratchasima) before dawn on Wednesday.

Reporters alerted to the sighting found him on the road in Sri Mahat Phot district.

The native of Udon Thani province married his wife in Trang province, but she died from tetanus in 2016 after being attacked by a dog.

He was deeply saddened by her loss. He remembered that she had always wanted to see a mountain in the North and the sea in Trat, and he had promised to take her there.

After her passing, he took her cremated bones and ashes from her hometown in Trang and set off  on foot, beginning a long journey to fulfill her dream and his promise. The urn containing her bones and ashes nestled among his few belongings on his pushcart, and their dog accompanied them.

He headed to the North, determined to first take her to Doi Intanon mountain in Chiang Mai province.

“I took my wife to Doi Intanon as I promised when she was alive. Sadly, I could take only her ashes and bones there,’’ said Mr Sakchai.

Along the way, he collected two abandoned dogs - bringing his canine travelling companions to three.  (continues) 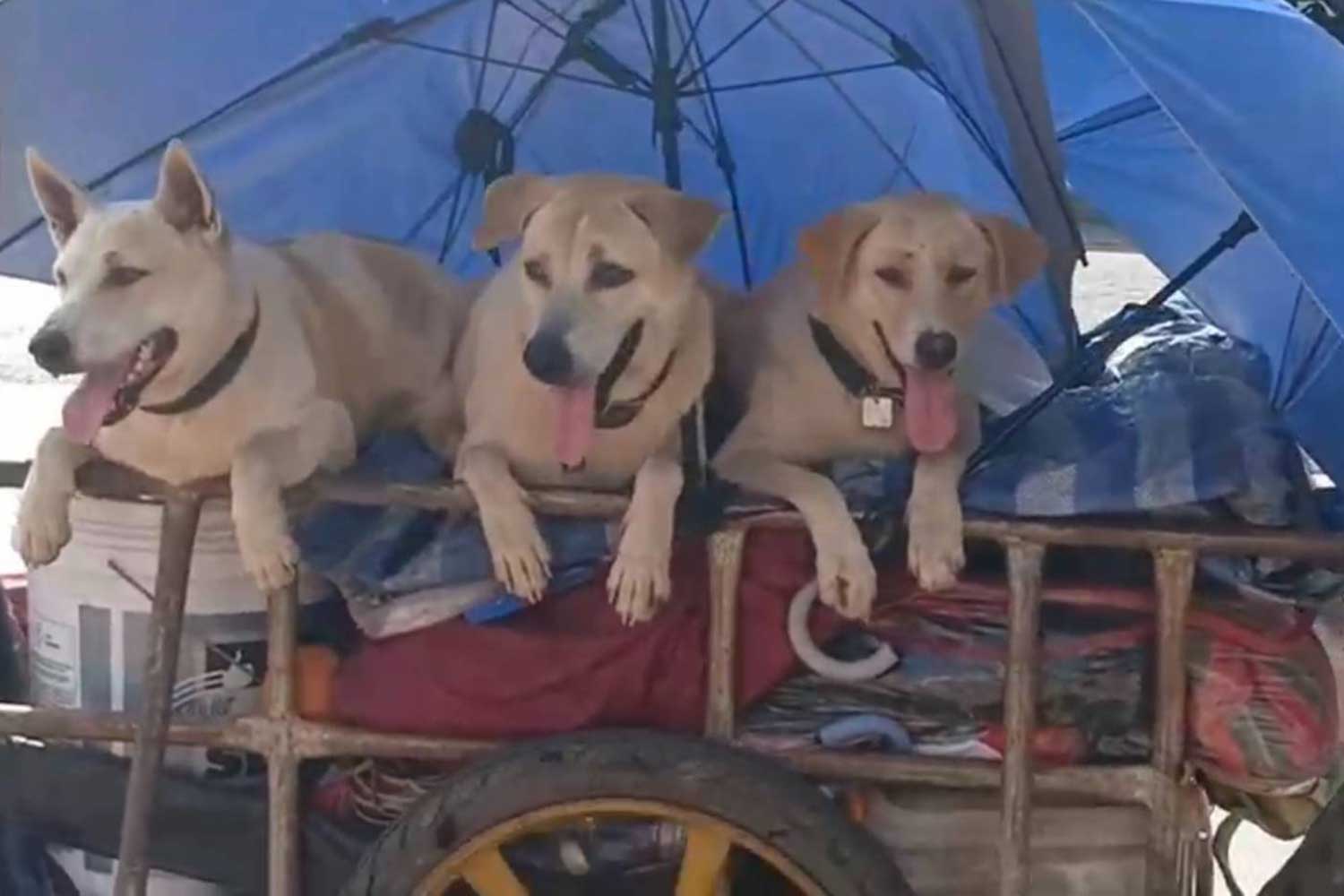 Mr Sakchai said he was devastated by the loss of his beloved wife, left without joy or anything to look forward to. So he set off on his trip, so he and his soulmate could visit places together.

“I am determined to take her bones around the country. She liked the sea and wanted to stay close to it. She used to tell me that she wanted to visit the sea in Trat province in the East. During my journey I stop every three kilometres or so, so the dogs can have a rest,’’ he said.

At night he erects mosquito nets for the dogs and for himself and his wife’s bones, and they sleep alongside each other.

Along the way, people who learn of his quest have bought food for him and the dogs, and he has also  relied on food from temples.

“I still love her and have vivid memories of our time together, even though she left me three years and four days ago,’’ Mr Sakchai said.

Suchin Khaothawin, a Ruam Katanyu rescue worker, said he felt immediate sympathy when seeing the man pushing his cart along the road in company with the three dogs. He invited him to take a rest at the rescue station when he passed by on Saturday. 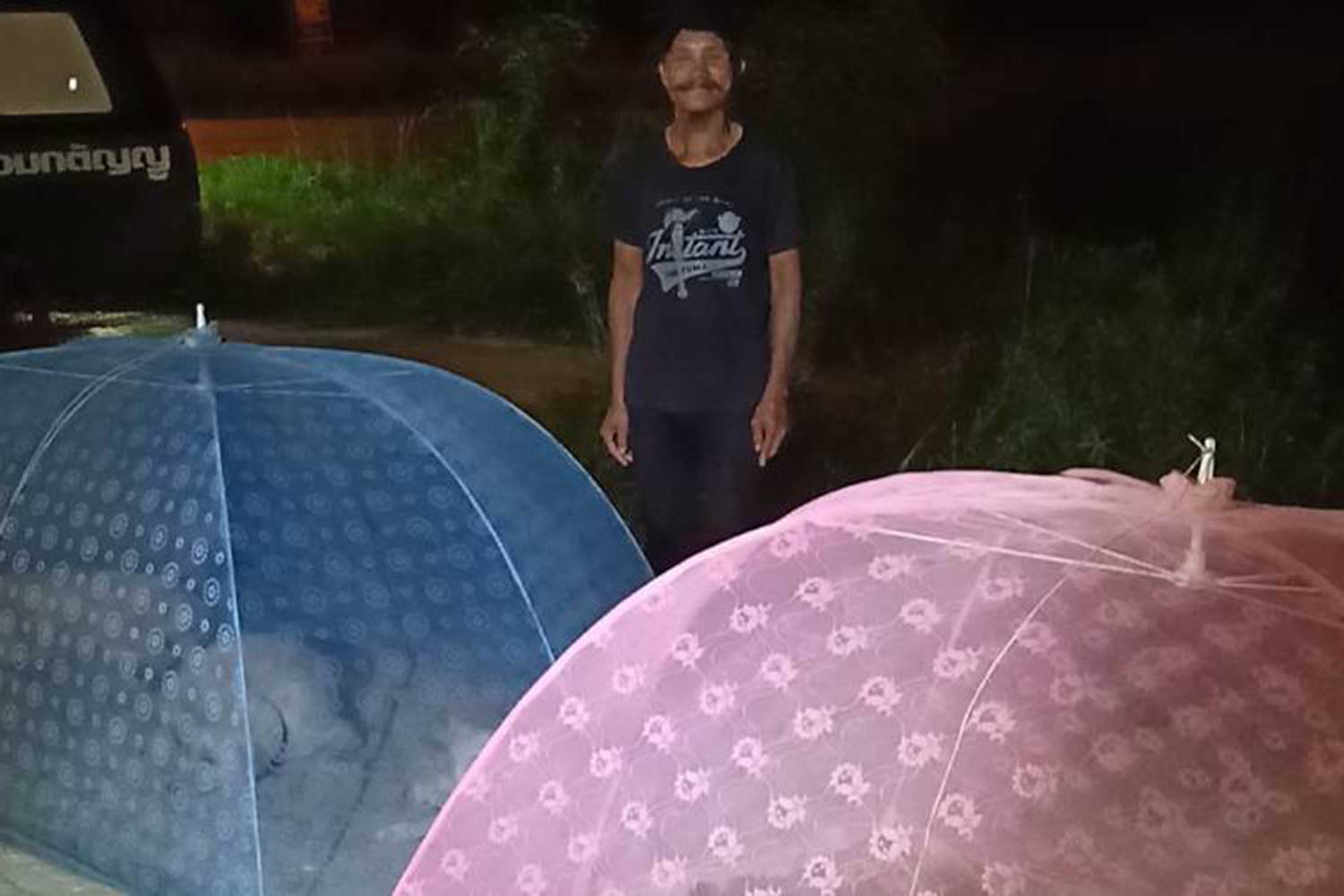 When hight falls, Mr Sakchai erects mosquito nets for his three travelling companions, and himself. (Photo by Manit Sanubboon)

Man charged with plastic-bag murder of his mother