Almost 300 human bone fragments were retrieved from a large pond near the home of a 40-year-old man in Bang Khae district of Bangkok on Friday. He was charged last week with murdering a woman and concealing her body. (Photo by Pornprom Satrabhaya)

Divers are expected to be called back on Sunday to search for more bodies after finding almost 300 bones earlier in a pond at the Bangkok home of a man charged with murdering a young woman and concealing her corpse.

Phetkasem police are coordinating with the Poh Teck Tung rescue foundation to help find more bones and other evidence, on the orders of Pol Maj Gen Chokchai Ngamwong, commander of the Metropolitan Police Division 9.

The foundation sent about 20 divers to the site on Saturday but the search was called off. Thai media quoted Pol Col Jirakrit Jarunpat, commander of the Women’s and Children’s Welfare Division, as saying that police would seek court approval to search the property once they had clearer evidence that dead people might be hidden there.

It is hoped that the search can resume on Sunday.

On Friday, a team of divers found a total of 288 bones in the pond at the end of Soi Phetkasem 47 in Bang Kae district, about five metres away from the location where they had found a human skeleton on Thursday. The skeleton was wrapped in clothes and a bedsheet and hidden under a large metal object and fastened to dumbbells with chains.

The search of the pond was ordered after police were convinced by witness testimony that it was possible there were two more corpses in the pond near the home of the murder suspect.

Apichai Ongwisit, 40, dubbed “Ice Heep Lek” (Ice Metal Casket) by local media, was arrested at his house early this month after police found the body of Warinthorn “Kuk-kik” Chaiyachet, 22, from Sakon Nakhon, wrapped in a plastic bag and buried on the man’s property.

The man reportedly earlier admitted he had killed the woman in August last year at his house. According to local media reports, the suspect  was a drug user who began a sexual affair with the woman and then fell in love with her. He reportedly ordered her to sleep in a metal casket, which he locked as he did not her to leave him. When he opened the casket in the morning, he found she had died from suffocation.

There had also been reports that Mr Apichai had released alligator gars and other carnivorous fish in the pond to consume the corpses. But members of the diving team involved in the search on Friday said they found no such fish.

Pol Col Jirakrit said Siriraj Hospital was examining the bones retrieved from the pond on Friday. As there were over 280 bones, the results of the forensic testing required time, he added.

A human skeleton contains 206 bones. For the time being, police could not say how many people the bones might have come from. They were awaiting the forensic results, he said.

The suspect is the son of the owner of the Ongwisit market in Bang Kae. His father had been arrested on charges of murdering and dismembering a 15-year-old girl in 1983. He was later shot dead. His mother, accused of masterminding the crime, subsequently fled abroad with his younger sister. 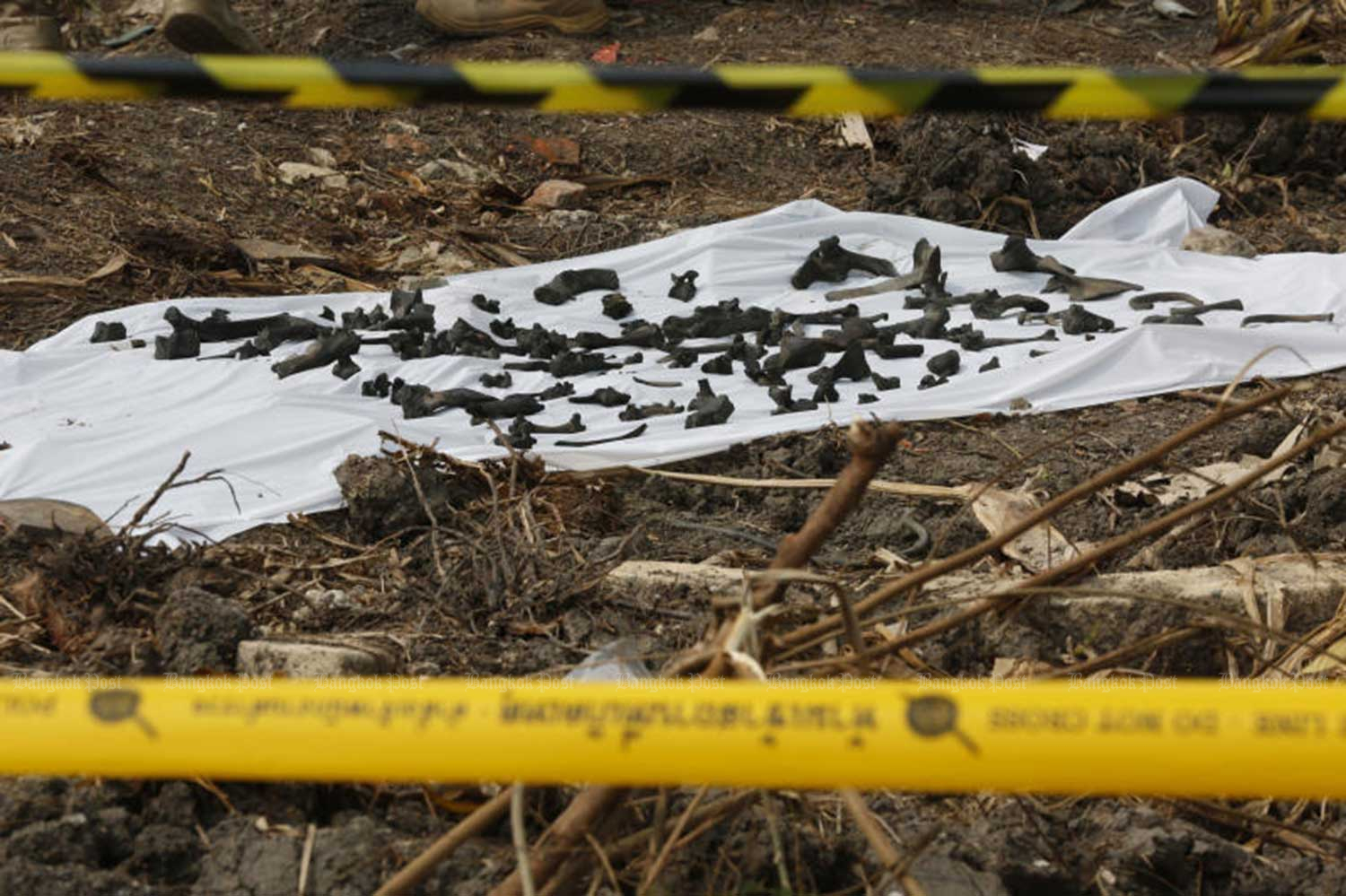 Human bone fragments found in the pond in Phetkasem Soi 47 are placed on a sheet before being sent to Siriraj Hospital for examination. (Photo by Pronprom Satrabhaya)